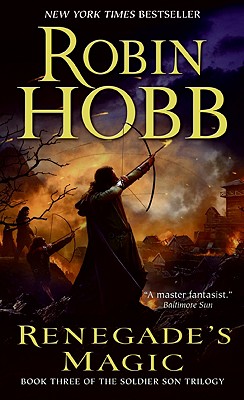 This is book number 3 in the Soldier Son Trilogy series.

Loyal, privileged, and brave—a soldier in the service of the King of Gernia—Nevare Burvelle survived a devastating plague of enemy sorcery, but at a terrible cost to his soul, body, and heart. Now he stands wrongly accused of unspeakable crimes, including murder, the most heinous of them all. Suddenly an outcast and a fugitive, he remains a hostage to the Speck magic that shackles him to a savage alter ego who would destroy everything Nevare holds dear. Perhaps, however, this curse that has long abused him can be used by him instead—a mighty weapon he can learn to wield for his own purposes. But down what perilous road will this desperate new quest lead him? And what will be the ultimate incarnation of Nevare Burvelle?

Robin Hobb was born in California but grew up in Alaska. It was there that she learned to love the forest and the wilderness. She has lived most of her life in the Pacific Northwest and currently resides in Tacoma, Washington. She is the author of five critically acclaimed fantasy series: The Rain Wilds Chronicles (Dragon Keeper, Dragon Haven, City of Dragons, Blood of Dragons), The Soldier Son Trilogy, The Tawny Man Trilogy, The Liveship Traders Trilogy, and The Farseer Trilogy. Under the name Megan Lindholm she is the author of The Wizard of the Pigeons, Windsingers, and Cloven Hooves. The Inheritance, a collection of stories, was published under both names. Her short fiction has won the Asimov's Readers' Award and she has been a finalist for both the Nebula and Hugo awards.

“Hobb is probably one of the best writers of the fantasy genre currently operating. With Robin Hobb you do not get the standard good versus evil story in which every character is one or the other. Instead her characters are believable, human and flawed.” — Birmingham Post