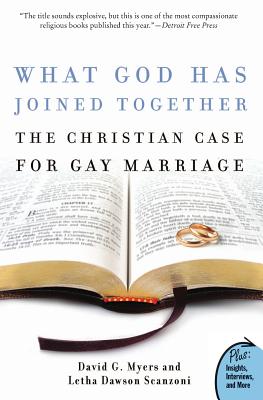 Gay marriage has become the most important domestic social issue facing twenty-first-century Americans -- particularly Americans of faith. Most Christians are pro-marriage and hold traditional family values, but should they endorse extending marriage rights to gays and lesbians? If Jesus enjoined us to love our neighbors as ourselves, and the homosexual is our neighbor, does that mean we should accept and bless gay marriages? These and other, related questions are tearing many faith-based communities apart.

Across the country, states have voted, courts have debated, and churches have divided over the legitimacy of same-sex marriage. Amid the uproar one perspective is decidedly missing: that of thoughtful, pro-marriage Christians who, informed by their faith, are struggling to make sense of this issue. What God Has Joined Together? is an effort to bridge the divide between marriage-supporting and gay-supporting people of faith by showing why both sides have important things to say and showing how both sides can coexist. Drawing on scientific research as well as on the Bible, the authors explain that marriage is emotionally, physically, financially, and spiritually beneficial for everyone, not just heterosexuals.

They debunk myths about sexual orientation, assess claims of sexual reorientation, and explore what the Bible does and does not say about same-sex relationships. The book ends with a persuasive case for gay marriage and outlines how this can be a win-win solution for all.

David G. Myers, the John Dirk Werkman Professor of Psychology at Michigan's Hope College, is the author of fifteen books, and articles in dozens of periodicals, from Science and Scientific American to The Christian Century and Christianity Today. He serves on the National Marriage Project advisory board. Myers has been married for forty-two years and is the father of three adult children.

Letha Dawson Scanzoni has authored or co-authored eight previous books, including Men, Women, and Change: A Sociology of Marriage and Family, and her classic Is the Homosexual My Neighbor? She is editor and publisher of the Evangelical & Ecumenical Women's Caucus publication Christian Feminism Today. Her many articles have appeared in numerous magazines, from Christianity Today and The Christian Century to the SIECUS Report and Utne Reader. Scanzoni is the mother of two and grandmother of five. She lives in southeastern Virginia.