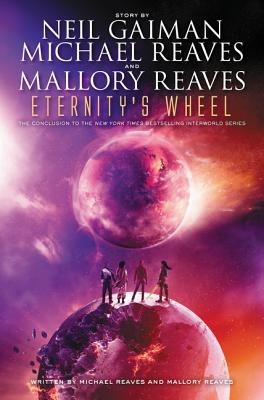 This is book number 3 in the InterWorld Trilogy series.

The heart-pounding conclusion to the bestselling InterWorld series, from Neil Gaiman, Michael Reaves, and Mallory Reaves! Eternity's Wheel is full of time and space travel, magic, science, and the bravery of a young boy who must now face his destiny as a young man.

Joey Harker never wanted to be a leader. But he's the one everyone is looking to now that FrostNight looms, and he'll have to step up if he has any hope of saving InterWorld, the Multiverse, and everything in between.

Michael Reaves is an Emmy Award-winning television writer and screenwriter who has written, story edited, or produced nearly four hundred teleplays for various series, including Star Trek: The Next Generation, The Twilight Zone, Sliders, and Monsters. He has published many books, including the New York Times bestseller Star Wars: Darth Maul: Shadow Hunter. He's also written short fiction, comic books, and the dialogue for a Megadeth video. He lives in California.

Mallory Reaves is best known for her adaptations of the popular manga series After School Nightmare, which was nominated for a Will Eisner Award. She lives in Riverside, California, with six cats, several friends, a dog, a snake, and a fish.

“Full of deep emotion, exciting action, and lush description. Gaiman, Reaves, and Reaves offer up a triumphant conclusion to the “Interworld” trilogy with this dynamic story.”
— School Library Journal

“[A] satisfying conclusion to the mesmerizing Interworld series.”
— Voice of Youth Advocates (VOYA)