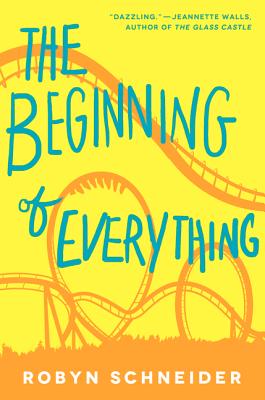 By Robyn Schneider
$17.99
Email or call for price.

Robyn Schneider's The Beginning of Everything is a witty and heart-wrenching teen novel that will appeal to fans of books by John Green and Ned Vizzini, novels such as The Perks of Being a Wallflower, and classics like The Great Gatsby and The Catcher in the Rye.

Varsity tennis captain Ezra Faulkner was supposed to be homecoming king, but that was before—before his girlfriend cheated on him, before a car accident shattered his leg, and before he fell in love with unpredictable new girl Cassidy Thorpe.

As Kirkus Reviews said in a starred review, "Schneider takes familiar stereotypes and infuses them with plenty of depth. Here are teens who could easily trade barbs and double entendres with the characters that fill John Green's novels."

Funny, smart, and including everything from flash mobs to blanket forts to a poodle who just might be the reincarnation of Jay Gatsby, The Beginning of Everything is a refreshing contemporary twist on the classic coming-of-age novel—a heart-wrenching story about how difficult it is to play the part that people expect, and how new beginnings can stem from abrupt and tragic endings.

Robyn Schneider is the bestselling author of The Beginning of Everything, Extraordinary Means, and Invisible Ghosts, which have earned numerous starred reviews, appeared on many state reading lists, and been published in over a dozen countries. She is a graduate of Columbia University, where she studied creative writing, and the University of Pennsylvania Perelman School of Medicine, where she earned a master of bioethics. She lives in Los Angeles, California, but also on the internet. You can find her at www.robynschneider.com.

Praise for THE BEGINNING OF EVERYTHING: “Smart writing and a compelling narrator raise this book above ordinary depictions of high school drama. Efficient use of language, evocative descriptions and subtle turns of phrase make reading and rereading this novel a delight.” — Kirkus Reviews (starred review)

“This thought-provoking novel about smart kids doing interesting things will resonate with the John Green contingent, as it is tinged with sadness, high jinks, wry humor, and philosophical pondering in equal measures.” — Booklist (starred review)

“Schneider shows remarkable skill at getting inside her narrator’s head as his life swings between disaster and recovery.” — Publishers Weekly (starred review)

“This is a wonderfully told story. The dialogue moves the plot along at a fast pace, and Ezra, with all his flaws, is a character to whom readers can relate. Teens won’t want to put this one down.” — School Library Journal

“The Beginning of Everything is a tragic romance of the best kind that leaves the reader feeling as though they are part of the story, and wishing there was more.” — Voice of Youth Advocates (VOYA)

“Heartbreaking and hilarious. I have no doubt that girls everywhere are going to fall madly, deeply, hopelessly in love with Ezra Faulkner.” — Sarah Mlynowski, author of A Little Bit Broken

“Smart, funny, heartbreaking, and so true it hurts…this is a book you will never forget.” — Lauren Barnoldt, author of Two-Way Street and Sometimes It Happens