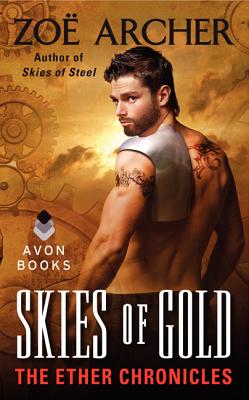 Kalindi MacNeil survived the devastating enemy airship attack that obliterated Liverpool, but even her engineering skills can't seem to repair her broken heart. Seeking to put her life back together, Kali retreats to a desolate, deserted island—only to discover she's not alone. Captain Fletcher Adams, an elite man/machine hybrid, a Man O' War, crashed his battle-damaged airship into the island after the destruction of Liverpool, never expecting to survive the wreck. But survive he did.

Believing he is nothing but a living weapon, Fletcher is wary of his newfound companion—a pretty, damaged, but determined young woman. Together they are stranded on the island, and it is only a matter of time until desire gets the best of them both. Soon Kali and Fletcher each find that they may be just what the other needed. But a danger from beyond the island puts them to the test. Will it rip them apart or bond their hearts forever?

Zoë Archer is a RITA® Award-nominated romance author who writes novels chock-full of adventure, sexy men, and women who make no apologies for kicking ass. Her books include the Hellraisers paranormal historical series and the acclaimed Blades of the Rose paranormal historical adventure series. She enjoys baking, Tweeting about boots, and listening to music from the '80s. Zoë and her husband, fellow romance author Nico Rosso, live in Los Angeles.