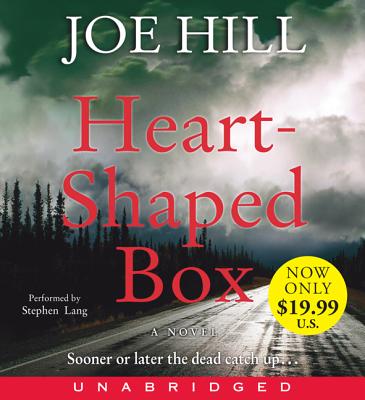 The publication of Joe Hill’s beautifully textured, deliciously scary debut novel Heart-Shaped Box was greeted with the sort of overwhelming critical acclaim that is rare for a work of skin-crawling supernatural terror. It was cited as a Best Book of the Year by Atlanta magazine, the Tampa Tribune, the St. Louis Post Dispatch, and the Village Voice, to name but a few. Award-winning, #1 New York Times bestselling Neil Gaiman of The Sandman, The Graveyard Book, and Anansi Boys fame calls Joe Hill’s story of a jaded rock star haunted by a ghost he purchased on the internet, “relentless, gripping, powerful.” Open this Heart-Shaped Box from two-time Bram Stoker Award-winner Hill if you dare and see what all the well-deserved hoopla is about.

Joe Hill is the #1 New York Times bestselling author of the novels The Fireman, NOS4A2, Horns, and Heart-Shaped Box; Strange Weather, a collection of novellas; and the acclaimed story collections Full Throttle and 20th Century Ghosts. He is also the Eisner Award–winning writer of a seven-volume comic book series, Locke & Key. Much of his work has been adapted for film and TV, including NOS4A2 (AMC), Locke & Key (Netflix), and In the Tall Grass (Netflix).

Stephen Lang's Broadway work includes Wait Until Dark, A Few Good Men, The Speed of Darkness and Death of a Salesman. His films include Last Exit to Brooklyn, Gettysburg, Gods and Generals, and Tombstone. He is the Co-Artistic Director of the Actors Studio.