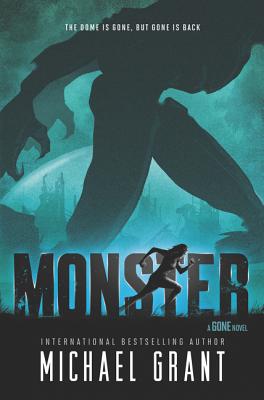 This is book number 7 in the Gone series.

It’s been four years since a meteor hit Perdido Beach and everyone disappeared. Everyone, except the kids trapped in the FAYZ—an invisible dome that was created by an alien virus. Inside the FAYZ, animals began to mutate and teens developed dangerous powers. The terrifying new world was plagued with hunger, lies, and fear of the unknown.

Now the dome is gone and meteors are hitting earth with an even deadlier virus. Humans will mutate into monsters and the whole world will be exposed. As some teens begin to morph into heroes, they will find that others have become dangerously out of control . . . and that the world is on the brink of a monstrous battle between good and evil.

“Ratchets up the gore and action, and features a diverse cast of characters. An evocative, intricately plotted companion series.” —ALA Booklist

Michael Grant, author of the Gone series, the Messenger of Fear series, the Magnificent Twelve series, and the Front Lines trilogy, has spent much of his life on the move. Raised in a military family, he attended ten schools in five states, as well as three schools in France. Even as an adult he kept moving, and in fact he became a writer in part because it was one of the few jobs that wouldn’t tie him down. His fondest dream is to spend a year circumnavigating the globe and visiting every continent. Yes, even Antarctica. He lives in California with his wife, Katherine Applegate, with whom he cowrote the wildly popular Animorphs series. You can visit him online at www.themichaelgrant.com and follow him on Twitter @MichaelGrantBks.

“Fans of this very popular series will no doubt clamor for this most recent addition.”
— School Library Journal

“New characters and old favorites abound in this follow-up. The cast is fairly diverse, covering a wide variety of skin colors, sexual orientations, and gender identities. Longtime fans will surely be excited by the novel’s final moments. A bombastic, engaging start to a sequel series full of potential.”
— Kirkus Reviews

“Grant’s modern take on the Dr. Jekyll and Mr. Hyde narrative ratchets up the gore and action, and features a diverse cast of characters...[An] evocative, intricately plotted companion series that delves into similar issues of bioethics and gray areas of morality.”
— Booklist

“Monster is a fast-paced, engaging read with a diverse cast of characters who must deal with their unpredictable powers, a corrupt government, and aliens with unclear motives who use humanity for their entertainment. Enough backstory is given for new readers to jump right in.”
— Voice of Youth Advocates (VOYA)

Praise for GONE: “”This intense, marvelously plotted, paced, and characterized story will immediately garner comparisons to Lord of the Flies or even the long-playing world shifts of Stephen King, with just a dash of X-Men for good measure.”
— Booklist (starred review)

Praise for HUNGER: “The tension starts in the first chapter and does not let up until the end The story is prgressing with smart plot twists, both in actions and emotions.”
— Voice of Youth Advocates (VOYA) (starred review)

Praise for LIES: “Disturbing, brilliantly plotted, and boasting a balanced mix of action and scheming.”
— Booklist

Praise for PLAGUE: “Grant’s science fantasy thrillers continue to be the very definition of a page-turner.”
— Booklist

Praise for LIGHT: “As a series finale, this book is more than satisfying-it is epic.”
— Voice of Youth Advocates (VOYA) (starred review)