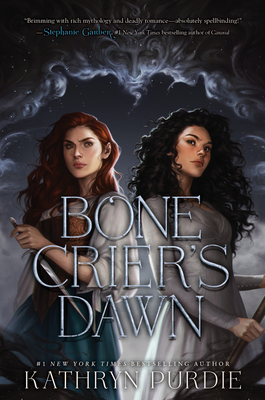 Ailesse and her friends change the afterlife in the gripping conclusion to the fantasy duology that began with Bone Crier’s Moon from New York Times bestselling author Kathryn Purdie—perfect for fans of Stephanie Garber and Roshani Chokshi. Now available in paperback.

Love is a matter of life and death.

Bone Criers have been ferrying the dead into the afterlife for centuries, a dangerous duty only possible with the powers they gain from sacrificing their amourés, the men destined to love them and die. But Bone Criers Ailesse and Sabine—along with Ailesse’s love, Bastien—are working to chart their own course and rewrite the rules of the afterlife. If they don’t break the soul bond between Ailesse and her amouré, she could die—just as Bastien’s father did.

Sabine struggles to maintain her authority as matrone of her famille—the role always destined for her sister—even as she fights to control the violent jackal power within her.

Bastien is faced with a new dilemma as the spirits of the Underworld threaten the souls of his friends—and his father.

Ailesse attempts to resist her mother’s siren song as she’s drawn into her own version of the Underworld. How will she save her friends once she’s cut off from their world?

This pulse-pounding follow-up to Bone Crier’s Moon is a story of love, sisterhood, and determination as three friends find the courage and power to shatter the boundary between the living and the dead.

Kathryn Purdie lives near Salt Lake City, Utah, with her husband and three children. Kathryn is a trained classical actress who studied at the Oxford School of Drama and was inspired to write her debut trilogy while recovering from donating a kidney to her older brother. www.kathrynpurdie.com.

“A magical story of compassion, forgiveness, and self-acceptance. This book might break your heart, but it will also warm your soul.” — Jodi Meadows, New York Times bestselling co-author of My Plain Jane

“Richly imagined, compelling, and darkly romantic, this book will leave you begging for more!” — Sara B. Larson, author of the Defy trilogy

“Filled with mystery and intrigue, betrayal and passion, Purdie’s political debut will sweep readers away to a world that is not that different from their own.” — School Library Journal

“Purdie expertly weaves a complex storyline with well-developed characters in a vividly described world to entrance readers with her words.” — Deseret News