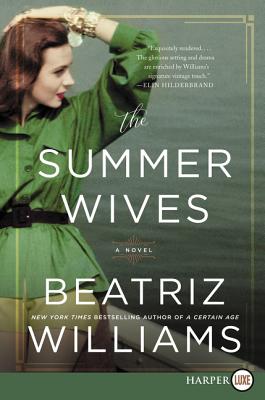 “The Summer Wives is an exquisitely rendered novel that tackles two of my favorite topics: love and money. The glorious setting and drama are enriched by Williams’s signature vintage touch. It’s at the top of my picks for the beach this summer.” — Elin Hilderbrand, author of The Perfect Couple

“Longtime Williams fans, readers of historical fiction and mysteries, and anyone seeking engaging plot twists will find satisfaction in these pages.” — Booklist

”Another hot book for summer from the prolific Williams... A romantic, multilayered tale.” — Philadelphia Inquirer

“Engrossing and gripping, you will finish this book in one sitting.” — St. Louis Post Dispatch

“The Summer Wives is a compulsively readable story that will make you swear you can smell the salt air.” — Popsugar

“This book is what the term “beach read” was made for.” — Buzzfeed

“Williams has crafted a kaleidoscope of a novel – a mystery, a romance, and an utterly beguiling examination of the cost of secrets . . . The Summer Wives is a startling portrait of the courage it requires to make your own second chances.” — Entertainment Weekly

“The Summer Wives by Beatriz Williams will give you the full order. It takes place on an exclusive island off Long Island Sound. Think: cocktails, sailing, croquet. A woman who visits as a teen falls in love with a local...who is later accused of murdering her stepfather. Intrigue, served.”   — SKIMM Reads