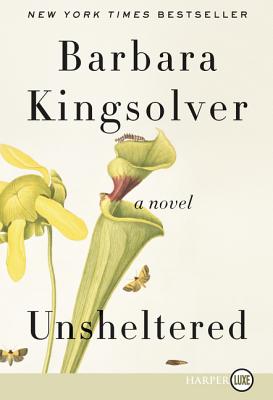 What do we really need? How does society react to unsettling new ideas? Why do so many flock to charlatans promising an easy fix? These are some of the questions that Kingsolver explores through her story of two families in different eras. Thought provoking and unsettling, this book will have you thinking about its questions and themes for a long time!

“A brilliant novel set in two different centuries, eras when lies trumped truth and superstition overruled science. Kingsolver illustrates human resiliency with insight, humor, and compassion in this deeply satisfying novel. While showing the cost of leadership built on false promises and lies, it also illustrates the strength of the human spirit with characters who will not be broken by their times. Kingsolver’scharacters, including historical figures Mary Treat and Charles Landis, shine as they make their way through the maze of survival set before them. Great reading.”
— Deon Stonehouse, Sunriver Books & Music, Sunriver, OR

Named one of the Best Books of the Year (2018) by NPR, O, The Oprah Magazine, San Francisco Chronicle, Christian Science Monitor and Newsweek

The New York Times bestselling author of Flight Behavior, The Lacuna, and The Poisonwood Bible and recipient of numerous literary awards—including the National Humanities Medal, the Dayton Literary Peace Prize, and the Orange Prize—returns with a timely novel that interweaves past and present to explore the human capacity for resiliency and compassion in times of great upheaval.

How could two hardworking people do everything right in life, a woman asks, and end up destitute? Willa Knox and her husband followed all the rules as responsible parents and professionals, and have nothing to show for it but debts and an inherited brick house that is falling apart. The magazine where Willa worked has folded; the college where her husband had tenure has closed. Their dubious shelter is also the only option for a disabled father-in-law and an exasperating, free-spirited daughter. When the family’s one success story, an Ivy-educated son, is uprooted by tragedy he seems likely to join them, with dark complications of his own.

In another time, a troubled husband and public servant asks, How can a man tell the truth, and be reviled for it? A science teacher with a passion for honest investigation, Thatcher Greenwood finds himself under siege: his employer forbids him to speak of the exciting work just published by Charles Darwin. His young bride and social-climbing mother-in-law bristle at the risk of scandal, and dismiss his worries that their elegant house is unsound. In a village ostensibly founded as a benevolent Utopia, Thatcher wants only to honor his duties, but his friendships with a woman scientist and a renegade newspaper editor threaten to draw him into a vendetta with the town’s powerful men.

Unsheltered is the compulsively readable story of two families, in two centuries, who live at the corner of Sixth and Plum in Vineland, New Jersey, navigating what seems to be the end of the world as they know it. With history as their tantalizing canvas, these characters paint a startlingly relevant portrait of life in precarious times when the foundations of the past have failed to prepare us for the future.

Barbara Kingsolver is the author of nine bestselling works of fiction, including the novels, Flight Behavior, The Lacuna, The Poisonwood Bible, Animal Dreams, and The Bean Trees, as well as books of poetry, essays, and creative nonfiction. Her work of narrative nonfiction is the enormously influential bestseller Animal, Vegetable, Miracle: A Year of Food Life. Kingsolver’s work has been translated into more than twenty languages and has earned literary awards and a devoted readership at home and abroad. She was awarded the National Humanities Medal, our country’s highest honor for service through the arts, as well as the prestigious Dayton Literary Peace Prize for her body of work. She lives with her family on a farm in southern Appalachia.

“Kingsolver’s dual narrative works beautifully. By giving us a family and a world teetering on the brink in 2016, and conveying a different but connected type of 19th-century teetering, Kingsolver creates a sense…that as humans we’re inevitably connected through the possibility of collapse, whether it’s the collapse of our houses, our bodies, logic, the social order or earth itself…In this engaged and absorbing novel, the two narratives reflect each other, reminding us of the dependability and adaptiveness of our drive toward survival.”
— Meg Wolitzer, New York Times Book Review

“Kingsolver brilliantly captures both the price of profound change and how it can pave the way not only for future generations, but also for a radiant, unexpected expansion of the heart.”
— O: The Oprah Magazine, 15 Best Books of 2018

“I felt almost bereft closing the cover on this book… With a spellbinding narrative and its exquisitely accurate evocation of two eras, Barbara Kingsolver’s novel is itself a shelter of sorts. One doesn’t want to leave it.”
— Helen Klein Ross, Wall Street Journal

“Barbara Kingsolver does something amazing in her new novel…Uncovering and appreciating the connections between the two stories, historical and contemporary, is the best reason to read the book…Both stories are compelling as Thatcher and Willa lead their families during dangerously uncertain times.”
— Associated Press

“UNSHELTERED’s title suggests a roof gone missing. But it’s also a resonant call to be more alert to our social predicaments, to ‘stand in the clear light of day.’”
— USA Today

“Unsheltered is a skillful blend of fact and fiction told in alternating chapters... It’s a winner all the way…an absolute giant of a book.”
— New York Journal of Books

“Sophisticated storytelling, compelling characters and sharp humor…Kingsolver is a writer who can help us understand and navigate the chaos of these times.”
— Minneapolis Star Tribune

“Kingsolver’s meticulously observed, elegantly structured novel unites social commentary with gripping storytelling…Containing both a rich story and a provocative depiction of times that shake the shelter of familiar beliefs, this novel shows Kingsolver at the top of her game.”
— Publishers Weekly (Boxed and Starred review)

“As always, Kingsolver gives readers plenty to think about. Her warm humanism coupled with an unabashed point of view make her a fine 21st-century exponent of the honorable tradition of politically engaged fiction.”
— Kirkus Reviews (starred review)

“Exceptionally involving and rewarding…There is much to delight in and think about while reveling in Kingsolver’s vital characters, quicksilver dialogue, intimate moments, dramatic showdowns, and lushly realized milieus…An enveloping, tender, witty, and awakening novel of love and trauma, family and survival, moral dilemmas and intellectual challenges…”
— Booklist (starred review)

“Riveting…A tour de force of fiction…about this dynamic conflict between individual expression and communal belonging...One of the most magical parts of UNSHELTERED is how Kingsolver skillfully blends her two narratives into one unified tale, with past and present repeatedly mirroring each other.”
— BookPage

“A return to the more ambitious, grand scale of novels such as The Lacuna and The Poisonwood Bible…A lively and vividly peopled novel of ideas…Clear throughout the novel is a tension between self-reliance and interdependence.”
— The Guardian (feature)