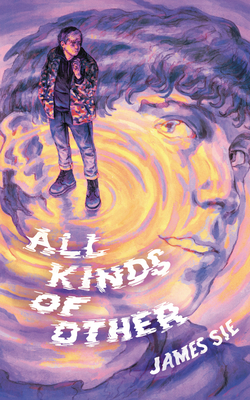 In this tender, nuanced coming-of-age love story, two boys—one who is cis, and one who is trans—have been guarding their hearts, until their feelings for each other give them a reason to stand up to their fears.

Two boys are starting over at a new high school.

Jules is still figuring out what it means to be gay…and just how out he wants to be.

Jack is reeling from a fall-out with his best friend…and isn’t ready to let anyone else in just yet.

When Jules and Jack meet, the sparks are undeniable. But when a video linking Jack to a pair of popular trans vloggers is leaked to the school, the revelations thrust both boys into the spotlight they’d tried to avoid.

Suddenly Jack and Jules must face a choice: to play it safe and stay under the radar, or claim their own space in the world—together.

James Sie is the author of Still Life Las Vegas, his debut novel, which was a Lambda Literary Award nominee for Best Gay Fiction. An award-winning playwright, he has had productions performed in Chicago, Los Angeles, New York (Lincoln Center Institute) and across the country. He has contributed essays to The Rumpus and The Advocate. In addition to writing, James is also a voiceover artist for many cartoons and games, including Avatar: The Last Airbender, where his excessive love of cabbages has earned him immortal fame. Born in New Jersey to immigrant parents, James now lives in Los Angeles with his husband and son. Visit his website at www.sieworld.com.

“A warm and open-hearted story about the perilousness and momentousness of navigating your gender and sexuality. Yes, it’s dangerous to be your authentic self, but, as Jules and Jack find out, the prize is worth the risk.”
— Naomi Kanakia, author of We Are Totally Normal

"James Sie writes with a keen observation of human behavior and rich, breathtaking details that make his characters leap to life. All Kinds of Other is a fresh—and needed—perspective on identity: the things we protect, what we reveal and how we love. I am in awe of this book; it was hard to put down."
— Maulik Pancholy, author of The Best at It

"Sie’s splendid novel is no stranger to surprises and suspense, which keep the pages turning, but it’s the fully realized, multidimensional characters that are the story’s real attraction. Both Jules and Jack are wonderfully appealing characters who will capture readers’ hearts, and watching their personal development and that of their relationship are what really capture and hold readers’ attention... A superb addition to the growing body of transgender literature."
— Booklist (starred review)

"Told in alternating points of view, this realistic romance revolves around two “new kids” who explore the bounds of their identities... Recommended."
— School Library Journal

“Tender and vulnerable, All Kinds of Other is the perfect read for anyone who’s scared of being their authentic self and needs that little ray of hope to show them that being yourself is always worth the risk.”
— The Nerd Daily