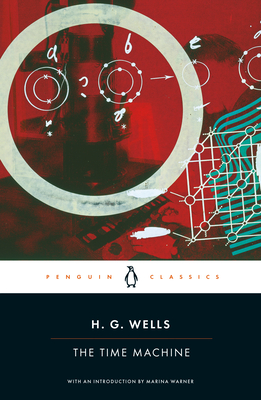 When a Victorian scientist propels himself into the year a.d. 802,701, he is initially delighted to find that suffering has been replaced by beauty, contentment, and peace. Entranced at first by the Eloi, an elfin species descended from man, he soon realizes that these beautiful people are simply remnants of a once-great culture—now weak and childishly afraid of the dark. They have every reason to be afraid: in deep tunnels beneath their paradise lurks another race descended from humanity—the sinister Morlocks. And when the scientist’s time machine vanishes, it becomes clear he must search these tunnels if he is ever to return to his own era.

This edition includes a newly established text, a full biographical essay on Wells, a list of further reading, and detailed notes. Marina Warner’s introduction considers Wells’s development of the “scientific romance” and places the novel in the context of its time.

For more than seventy years, Penguin has been the leading publisher of classic literature in the English-speaking world. With more than 1,700 titles, Penguin Classics represents a global bookshelf of the best works throughout history and across genres and disciplines. Readers trust the series to provide authoritative texts enhanced by introductions and notes by distinguished scholars and contemporary authors, as well as up-to-date translations by award-winning translators.

H.G. Wells was a professional writer and journalist, who published more than a hundred books, including novels, histories, essays and programmes for world regeneration. Wells's prophetic imagination was first displayed in pioneering works of science fiction, but later he became an apostle of socialism, science and progress. His controversial views on sexual equality and the shape of a truly developed nation remain directly relevant to our world today. He was, in Bertrand Russell's words, 'an important liberator of thought and action'.

Marina Warner is a famed writer and critic. Patrick Parrinder has written on H.G. Wells, science fiction, James Joyce and the history of the English novel. Since 1986 he has been Professor of English at the University of Reading.

Steven McLean is Secretary of the H.G. Wells Society. He recently completed his PhD on H.G. Wells at the University of Sheffield.

“[Wells] contrives to give over humanity into the clutches of the Impossible and yet manages to keep it down (or up) to its humanity, to its flesh, blood, sorrow, folly.” —Joseph Conrad