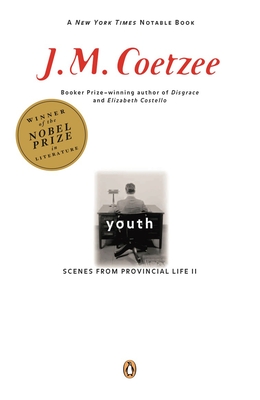 This is book number 2 in the Scenes from Provincial Life series.

J.M. Coetzee's latest novel, The Schooldays of Jesus, is now available from Viking. Late Essays: 2006-2016 will be available January 2018.

The second installment of J. M. Coetzee's fictionalized "memoir" explores a young man's struggle to experience life to its full intensity and transform it into art. The narrator of Youth has long been plotting an escape-from the stifling love of his overbearing mother, a father whose failures haunt him, and what he is sure is impending revolution in his native country of South Africa. Arriving at last in London in the 1960s, however, he finds neither poetry nor romance and instead begins a dark pilgrimage into adulthood. Youth is a remarkable portrait of a consciousness, isolated and adrift, turning in on itself, of a young man struggling to find his way in the world, written with tenderness and a fierce clarity.

Born in Cape Town, South Africa, on February 9, 1940, John Michael Coetzee studied first at Cape Town and later at the University of Texas at Austin, where he earned a Ph.D. degree in literature. In 1972 he returned to South Africa and joined the faculty of the University of Cape Town. His works of fiction include Dusklands, Waiting for the Barbarians, which won South Africa’s highest literary honor, the Central News Agency Literary Award, and the Life and Times of Michael K., for which Coetzee was awarded his first Booker Prize in 1983. He has also published a memoir, Boyhood: Scenes From a Provincial Life, and several essays collections. He has won many other literary prizes including the Lannan Award for Fiction, the Jerusalem Prize and The Irish Times International Fiction Prize. In 1999 he again won Britain’s prestigious Booker Prize for Disgrace, becoming the first author to win the award twice in its 31-year history. In 2003, Coetzee was awarded the Nobel Prize in Literature.

"A delight to read: it will make you angry, amused, scornful and sympathetic by turns." (San Francisco Chronicle)