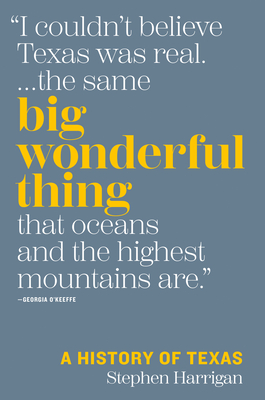 "Harrigan, surveying thousands of years of history that lead to the banh mi restaurants of Houston and the juke joints of Austin, remembering the forgotten as well as the famous, delivers an exhilarating blend of the base and the ignoble, a very human story indeed. [ Big Wonderful Thing is] as good a state history as has ever been written and a must-read for Texas aficionados.”—Kirkus, Starred Review

The story of Texas is the story of struggle and triumph in a land of extremes. It is a story of drought and flood, invasion and war, boom and bust, and the myriad peoples who, over centuries of conflict, gave rise to a place that has helped shape the identity of the United States and the destiny of the world.

“I couldn’t believe Texas was real,” the painter Georgia O’Keeffe remembered of her first encounter with the Lone Star State. It was, for her, “the same big wonderful thing that oceans and the highest mountains are.”

Big Wonderful Thing invites us to walk in the footsteps of ancient as well as modern people along the path of Texas’s evolution. Blending action and atmosphere with impeccable research, New York Times best-selling author Stephen Harrigan brings to life with novelistic immediacy the generations of driven men and women who shaped Texas, including Spanish explorers, American filibusters, Comanche warriors, wildcatters, Tejano activists, and spellbinding artists—all of them taking their part in the creation of a place that became not just a nation, not just a state, but an indelible idea.

Written in fast-paced prose, rich with personal observation and a passionate sense of place, Big Wonderful Thing calls to mind the literary spirit of Robert Hughes writing about Australia or Shelby Foote about the Civil War. Like those volumes, it is a big book about a big subject, a book that dares to tell the whole glorious, gruesome, epically sprawling story of Texas.

Harrigan has devoted much of his life to exploring and explaining Texas, ever since his family crossed the Red River from Oklahoma in 1953. He is the author of numerous works of nonfiction and fiction, including the critically acclaimed novels A Friend of Mr. Lincoln, Remember Ben Clayton, and the New York Times best seller The Gates of the Alamo. He is a longtime writer for Texas Monthly and an award-winning screenwriter who has written many movies for television.

"Harrigan, surveying thousands of years of history that lead to the banh mi restaurants of Houston and the juke joints of Austin, remembering the forgotten as well as the famous, delivers an exhilarating blend of the base and the ignoble, a very human story indeed. [Big Wonderful Thing is] as good a state history as has ever been written and a must-read for Texas aficionados."
— Kirkus, Starred Review

"Harrigan, essentially, is to Texas literature what Willie Nelson is to Texas music…Texas is an incredibly fascinating state—and Harrigan, who recognizes that the state's diversity is what makes it great, truly does it justice. Endlessly readable and written with great care, Big Wonderful Thing is just that."
— NPR

"The great strength of Harrigan’s work is that he tells the stories of all the types of people who have lived in Texas, from its earliest days into modern times, with a sense that all of their lives mattered in fashioning the state’s identity."
— New York Review of Books

"[Harrigan] has now given us a—no other word for it—Texas-sized book about the place he’s called home for decades. Lavishly illustrated, fully annotated, brimming with sass, intelligence, trenchant analysis, literary acumen and juicy details, it is a page-turner that can be read straight through or at random. It is big. It is popular history at its best."
— Wall Street Journal

"Harrigan describes post-Columbian Texas in novelistic style in this eloquent homage to the Lone Star state...History lovers will enjoy this packed, fascinating account of a singular state."
— Publishers Weekly

"The shelf that holds your Texana—T.R. Fehrenbach's 'Lone Star,' James Michener's fictionalized 'Texas'—may need to be reinforced. Harrigan…has a contender to sit beside those worthy tomes…Harrigan's Lone Star tales are embodied by people great and unknown, many of whom would not have registered in what he calls the 'revised standard version of Texas history.'"
— San Antonio Express-News

"Because it is so well told and because it embraces so much of the state’s charms and contradictions, Big Wonderful Thing is likely to define popular Texas history for the general reader for at least a generation to come."
— austin360

"Harrigan is at his best when he concentrates on the state's abundance of big personalities, offering up a gallery of Texas scoundrels, psychopaths, and incompetents...[Harrigan] brings an appealing humility to the impossible task of cramming a raucous, vicious, glorious state into one big, wonderful book."
— Texas Observer

"A big wonderful book…[Big Wonderful Thing] is fun to read. Harrigan knows how to tell a story that keeps the reader looking forward to the next one."
— Abilene Reporter-News

"Big Wonderful Thing…takes readers around the vast landscape [of Texas] to see everything from the first native tribes and colonists to artists and politicians. Harrigan's book connects the people and places who've made Texas what it was and is."
— Alcalde

"Harrigan’s gift for storytelling makes this monumental work a pleasure to read. Throughout this extremely well-researched and fascinating book, Harrigan strives to dispel the myths of Texas history and remain true to its reality, creating a real page-turner for aficionados of Texas history and novices alike."
— The Literary South

"[Big Wonderful Thing] provides an excellent perspective on [Texas's] rich history with a wider, more diverse lens…Harrigan brings his exceptional talents for storytelling and reporting to this volume that promises to educate—and entertain—many about the complexitites of this rich and storied state."
— Texas Highways

"The sheer number of individual Texans, here, is as incredible as the Texas landscape...Along with the usual suspects of Texas lore, Big Wonderful Thing throws light on many overlooked figures...Harrigan serves as a masterful guide on this journey, navigating Big Wonderful Thing safely between the abyss of historical revisionism and the fairyland of hagiography. Harrigan's Texas is mythically large and as majestically unusual as the longhorn that Texans love so much, but Big Wonderful Thing keeps its feet firmly planted on the ground."
— The American Conservative

"Harrigan is a master storyteller and weaves a highly enjoyable tale of Texas that is sometimes tall but always big. A must-read for all Texans and those who are  curious about more than the legend of the state."
— Library Journal, Starred Review

"[An] epic new history of Texas…The book is nosed out in sheer heft only by Texas itself, it seems. But it doesn't read that way. Harrigan…outlines Texas' particulars from prehistory to just after 9/11 in granular detail, with an intimate, conversational style."
— Houston Chronicle

"A comprehensive look at the history of our state...Harrigan doesn't burnish the heights or ignore the depths of Texas history; his book reflects both the bright and the dark, like a piece of photographic film, recording light and shadow as it makes an image."
— Kerrville Daily Times

"Before embarking on Stephen Harrigan's Big Wonderful Thing I kept asking myself, do I really need to read a 900-page history of Texas? Well, I suppose I didn't need to but within 20 pages I wanted to, every spare moment I got."
— Geoff Dyer, Literary Hub

"What really sets Big Wonderful Thing apart is that it reads more like Lonesome Dove than it does something you might have been assigned in your seventh grade Texas history class. Harrigan is a master of identifying anecdotes that have been tucked away in forgotten corners, dusting them off, and spinning them into great yarns...Though the book leads the reader on a singular, epic trip through the state’s past, each chapter also manages to feel self-contained, like a magazine feature."
— Texas Monthly, "19 Moments That Shaped Texas in 2019"

"At once objective and intensely personal, this expansive history exposes the reality beneath the myth of Texas exceptionalism and, in the process, gives overdue credit to people who fought in the shadows to forge a multi-cultural society where, today, Vietnamese refugees stand arm in arm with Alamo descendants. Harrigan has done a remarkable thing: in 900-plus pages, he vividly reimagines the endlessly fascinating saga of a state and its citizens."
— Pima County Public Library, "Southwest Books of the Year"

"The long-awaited history of Texas by a master storyteller is here. We haven’t had such a definitive history in years. For all readers, what Harrigan does so well is bring these stories to life — no dry tome here."
— Houston Chronicle, "Our 15 Favorite Books of 2019"

"Harrigan takes the yellowed vanish off in his magnificent new history of Texas…[Big Wonderful Thing is] a great corrective for those of us who grew up hearing mostly about the evils of carpet baggers and scalawags."
— Rivard Report

"Harrigan has crafted a volume of almost 900 pages that reads like a series of presentations by master storytellers. He connects the prominent dots of much-discussed figures and events with threads about everyday Texans whose stories, many told here for the first time, illustrate important parts of the state's history. Even when Harrigan is trading in the familiar, he marshals fresh detail about women, enslaved Africans, Native Americans, poor whites, and other stripes of Texan often overlooked in accounts of the state's formation...The title, from a statement by the artist Georgia O'Keefe, perfectly suits this well-researched and highly readable book."
— HistoryNet

"Throughout Big Wonderful Thing, Harrigan's sense of wonder is infectious, leading the reader to see the state with fresh eyes, to see its landscape and the people on it as deserving of their reputation as outsized in every respect, larger than life."
— Austin Chronicle

"Big Wonderful Thing is a popular history of Texas that does exactly what the author intended: provide highly readable and entertaining coverage of the sweep of Texas history."
— Southwestern Historical Quarterly

"[Big Wonderful Thing] reads like a novel about our great state’s history with all the beauty, suspense, kindness, strength, tragedy, loss, and even horror you’d never expect from a history book."
— San Antonio Report

"Harrigan updates Fehrenbach and his history of the Lone Star state lives up to its forebear's high standard. Of particular interest is the attention Harrigan pays to marginalized groups; his writing on native peoples and African Americans in Texas is compelling."
— Publishers Weekly, "The 10 Best Books About Texas"