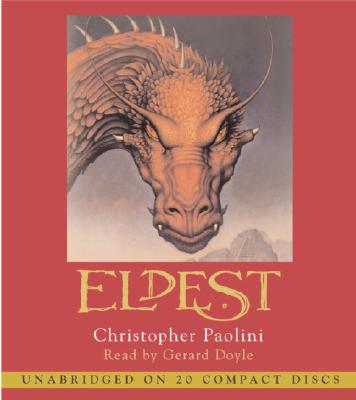 By Christopher Paolini, Gerard Doyle (Read by)
$55.00
Email or call for price.

This is book number 2 in the The Inheritance Cycle series.

Eragon and his dragon, Saphira, have just saved the rebel state from destruction by the mighty forces of King Galbatorix, cruel ruler of the Empire. Now Eragon must travel to Ellesmera, land of the elves, for further training in the skills of the Dragon Rider: magic and swordsmanship. Soon he is on the journey of a lifetime, his eyes open to awe-inspring new places and people, his days filled with fresh adventure. But chaos and betrayal plague him at every turn, and nothing is what it seems. Before long, Eragon doesn’t know whom he can trust.

Meanwhile, his cousin Roran must fight a new battle–one that might put Eragon in even graver danger.

Will the king’s dark hand strangle all resistance? Eragon may not escape with even his life. . . .


Praise for Eragon:
“Unusual, powerful . . . fresh and fluid. An impressive start to a writing career that’s sure to flourish.” –Booklist, Starred
“Christopher Paolini make[s] literary magic with his precocious debut.” –People
“The new ‘It’ book of children’s lit.” –U.S. News & World Report
“An auspicious beginning to both career and series.” –Publishers Weekly

Christopher Paolini's abiding love of fantasy inspired him to write the Inheritance Cycle, which quickly became an internationally bestselling series. He began the first draft of the introductory book in the series, Eragon, at age fifteen. Christopher draws inspiration for the world of Eragon and his dragon, Saphira, from the natural beauty that surrounds his home in Montana: the tumultuous weather, the roaring Yellowstone River, and the soaring Beartooth Mountains. Find out more about Christopher and the Inheritance Cycle at paolini.net.

"Paolini is a spellbinding fantasy writer." —The Boston Globe

"A breathtaking and unheard of success." —USA Today