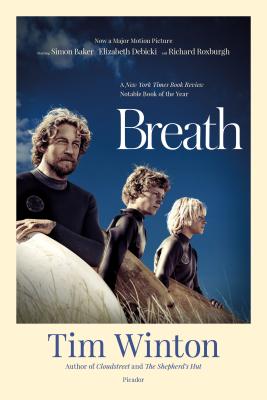 Breath is a story of risk, of learning one's limits by challenging death. On the wild, lonely coast of Western Australia, two thrill-seeking teenage boys fall under the spell of a veteran big-wave surfer named Sando. Their mentor urges them into a regiment of danger and challenge, and the boys test themselves and each other on storm swells and over shark-haunted reefs. The boys give no thought to what they could lose, or to the demons that drive their mentor on into ever-greater danger. Venturing beyond all caution--in sports, relationships, and sex--each character approaches a point from which none of them will return undamaged.

Tim Winton is widely considered one of the greatest living Australian writers. He has published numerous books, and his work has been translated into twenty-eight languages. Since his first novel, An Open Swimmer, won the Australian/Vogel Award in 1981, he has won the Miles Franklin Award four times (for Shallows, Cloudstreet, Dirt Music, and Breath) and twice been shortlisted for the Booker Prize (for The Riders and Dirt Music). He lives in Western Australia.

“Plunge into this novel and you, too, will be pulled under.” —The Miami Herald

“Stunning in the depth of its audacity...Limitlessly beautiful prose.” —The Washington Post Book World

“Darkly exhilarating...A tautly gorgeous meditation on the inescapable human addiction to 'the monotony of drawing breath,' whether you want to or not.” —The New York Times Book Review

“Both a hymn to the beauty of flying on water and a sober assessment of the costs of losing one's balance, in every sense of the word.” —The New Yorker

“A tender, incisive, sometimes brutal, and always moving coming-of-age novel...The prose is always astonishing, the descriptions of sea and weather especially vivid....The book seems as simple, and as vital, as the act of breathing itself.” —The Seattle Times

“Breath is a coming-of-age novel written with Tim Winton's customary tenderness and vivid sense of place and psychological truth. He manages to portray brilliantly made characters against a mythic landscape, thus creating a narrative that is gripping and breath-taking both in its vast scope and in its use of emotional detail. This is his most forceful and perfect novel to date.” —Colm Toibin, author of The Master

“The book's main characters jump off the page....And, as in previous Winton novels, the prose is always astonishing, the descriptions of sea and weather especially vivid....In the end, the book seems as simple, and as vital, as the act of breathing itself.” —Adam Woog, The Seattle Times