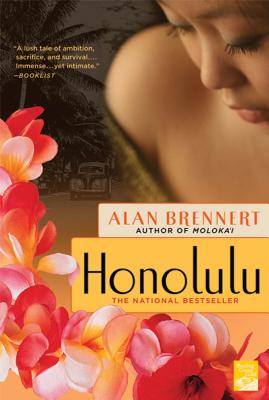 This book spans decades and continents and cultures and does it all beautifully. I loved the characters in this book and the real historical inspiration for the events. This was a lush, satisfying read that I devoured in a day.

“Alan Brennert's novel of Jin, a young Korean who has emigrated to Hawaii to become a 'picture bride.' But her new husband is not a handsome, young man and she does not find a better life, where women can be educated along with the boys. Brennert's story will pull you into the early days of Hawaii, and it brims with interesting history.”
— Deon Stonehouse, Sunriver Books, Sunriver, OR

From the bestselling author of the "dazzling historical saga" (The Washington Post), Moloka'i, comes the irresistible story of a young immigrant bride in a ramshackle town that becomes a great modern city

"In Korea in those days, newborn girls were not deemed important enough to be graced with formal names, but were instead given nicknames, which often reflected the parents' feelings on the birth of a daughter: I knew a girl named Anger, and another called Pity. As for me, my parents named me Regret."

Honolulu is the rich, unforgettable story of a young "picture bride" who journeys to Hawai'i in 1914 in search of a better life.

Instead of the affluent young husband and chance at an education that she has been promised, she is quickly married off to a poor, embittered laborer who takes his frustrations out on his new wife. Renaming herself Jin, she makes her own way in this strange land, finding both opportunity and prejudice. With the help of three of her fellow picture brides, Jin prospers along with her adopted city, now growing from a small territorial capital into the great multicultural city it is today. But paradise has its dark side, whether it's the daily struggle for survival in Honolulu's tenements, or a crime that will become the most infamous in the islands' history...

With its passionate knowledge of people and places in Hawai'i far off the tourist track, Honolulu is most of all the spellbinding tale of four women in a new world, united by dreams, disappointment, sacrifices, and friendship.

Alan Brennert is a novelist, screenwriter, and playwright. He grew up in New Jersey but moved to California in 1973. His novel Moloka’i was a national bestseller and a One Book, One San Diego selection for 2012. It also received the Bookies Award, sponsored by the Contra Costa Library, for the 2006 Book Club Book of the Year. His next novel, Honolulu, won First Prize in Elle Magazine’s Literary Grand Prix for Fiction and was named one of the best books of 2009 by The Washington Post. Of his novel Palisades Park, People Magazine said: “Brennert writes his valentine to the New Jersey playground of his youth in Ragtime-style, mixing fact and fiction. It’s a memorable ride.”

His work as a writer-producer for the television series L.A. Law earned him an Emmy Award and a People’s Choice Award in 1991. He has been nominated for an Emmy on two other occasions, once for a Golden Globe Award, and three times for the Writers Guild Award for Outstanding Teleplay of the Year.

Alan's short story"Ma Qui" was honored with a Nebula Award in 1992. His story “Her Pilgrim Soul” was adapted by Brennert himself for the Alan Menken musical Weird Romance in 1992.

His novel, Daughter of Moloka'i is a follow-up to Moloka'i that tells the story of Rachel Kalama's daughter Ruth, her early life, her internment during World War II, and her eventual meeting with her birth mother, Rachel. The novel explores the women's 22-year relationship, only hinted at it in Moloka'i.

“A sweeping, meticulously researched saga that sees it plucky heroine, a mistreated but independent-minded Korean mail-order bride, through the highs and lows of life in twentieth-century Hawai'i, this book extends our readers' tradition of favoring lush, flavorful historical novels.” —Elle

“A well-researched and deftly written tale….For sheer readability, it's a hit…. Brennert has a good eye for places we can't see anymore: plantation life before the unions gained power; Chinatown when it was all tenements; Waikiki before the high-rises started going up. And it's clear he has real affection for the little people and places he so vividly brings to life. He's not just using historic Honolulu as a place to set a novel; he's bringing it to life for people who haven't had the chance to imagine it before.” —Honolulu Star-Bulletin


“To its core, Honolulu is meticulously researched….Brennert portrays the Aloha State's history as complicated and dynamic—not simply a melting pot, but a Hawaiian-style ‘mixed plate’ in which, as Jin sagely notes, ‘many different tastes share the plate, but none of them loses its individual flavor, and together they make up a uniquely “local” cuisine.” —The Washington Post

“Successful historical fiction doesn't just take a story and doll it up with period detail. It plunges readers into a different world and defines the historical and cultural pressures the characters face in that particular time and place. That's what Los Angeles writer Alan Brennert did in his previous novel, Moloka'i, the story of diseased Hawaiians exiled in their own land. He has done it again in "Honolulu," which focuses on the Asian immigrant experience in Hawaii, specifically that of Korean picture brides….This is a moving, multilayered epic by a master of historical fiction, in which one immigrant's journey helps us understand our nation's "becoming.” —San Francisco Chronicle

“[A] sweeping, epic novel….Brennert weaves the true stories of early Hawaii into his fictional tale, and many of the captivating people Jin encounters are real. His depiction of the effects of the Depression is startling. Let's hope Brennert follows up this second novel with a third and continues to capture this intriguing and little-explored segment of American history in beautifully told stories.” —Library Journal (starred review)

“Brennert's lush tale of ambition, sacrifice, and survival is immense in its dramatic scope yet intimate in its emotive detail.” —Booklist

“Intriguing….Honolulu offers endless insights into a culture many readers may never have encountered, and Brennert further enlivens his tale by dropping in historical figures, some fictional, such as Charlie Chan, and some real, such as Clarence Darrow. But it is Korea that's the real focus of this story, and readers get a sympathetic feel for the daily humiliations the native population suffered from the Japanese who conquered the country….[Brennert's] smooth narrative style makes the book a pleasure to read.” —Roanoke Times

“With skill, historic accuracy and sensitivity and a clear passion for the people and places in Hawaii, Brennert weaves a story that will move and inspire readers.” —The Oklahoman

“In this dazzling rich, historical story, a young ‘picture bride' travels to Hawaii in 1914 in search of a better life….This intriguing novel is a fascinating literary snapshot of Hawaii during the early years of the last century. The story is compelling, poignant and powerful.” —Tucson Citizen