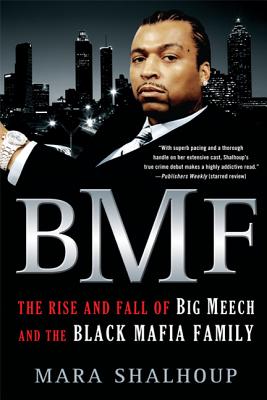 In the early 1990s, Demetrius "Big Meech" Flenory and his brother, Terry "Southwest T," rose up from the slums of Detroit to build one of the largest cocaine empires in American history: the Black Mafia Family. They socialized with music mogul Sean "Diddy" Combs, did business with New York's king of bling Jacob "The Jeweler" Arabo, and built allegiances with rap superstars Young Jeezy and Fabolous. Yet even as BMF was attracting celebrity attention, its crew members struck fear in a city.

When the brothers began clashing in 2003, the flashy and beloved Big Meech risked it all on a shot at legitimacy in the music industry. At the same time, utilizing a high-stakes wiretap operation, the feds inched toward their goal of destroying the Flenory's empire and ending the reign of a crew suspected in the sale of thousands of kilos of cocaine — and a half-dozen unsolved murders.

Mara Shalhoup is a decorated journalist and a senior editor with Creative Loafing, the preeminent alternative newsweekly serving the South. She started her writing career as a crime reporter at the Macon Telegraph, and has gone on to earn such honors as a Clarion Award, two nominations for a Livingston Award, and recognition from the Atlanta Press Club as the city’s Journalist of the Year. BMF: The Rise and Fall of Big Meech and the Black Mafia Family is her first book. She lives with her husband in Atlanta.

“…deftly tracks the fortunes of multiple BMF associates and their pursuers in law enforcement… her journalistic chops convey two inescapable messages: The cocaine industry is bigger and more entrenched than most people suspect; and sooner or later, no matter how glamorous, everybody goes down.” —Kirkus Reviews

“A wild ride rivaling anything you've seen in a Hollywood crime movie.” —MOG.com