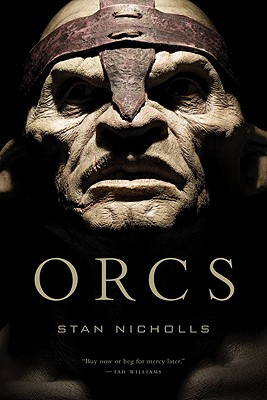 This is book number 1 in the Orcs series.

Fantasy's bad guys finally get their due in the first book of this action packed tale of Orc valor and human treachery.

Look at me. Look at the Orc.

There is fear and hatred in your eyes. To you I am a monster, a skulker in the shadows, a fiend to scare your children with. A creature to be hunted down and slaughtered like a beast in the fields.

It is time you pay heed to the beast. And see the beast in yourself. I have your fear. But I have earned your respect.

Hear my story. Feel the flow of blood and be thankful. Thankful that it was me, not you, who bore the sword. Thankful to the orcs; born to fight, destined to win peace for all."

This book will change the way you feel about Orcs forever.

Stan Nicholls is the author of more than two dozen books, most of them in the fantasy and science fiction genres, for both children and adults. His books have been published in over twenty countries. Before taking up writing full-time in 1981, he co-owned and managed West London bookstore Bookends, and managed specialist SF bookshop Dark They Were and Golden Eyed. He was also Forbidden Planet's first manager, and helped establish and run the New York branch.

A journalist for national and specialist publications, and the Internet, he was the science fiction and fantasy book reviewer for London listings magazine Time Out for six years, and subsequently reviewed popular science titles for the magazine. He received the Le'Fantastique Lifetime Achievement Award for Contributions to Literature in April 2007. Find out more about the orcs at www.theorcsarecoming.com.