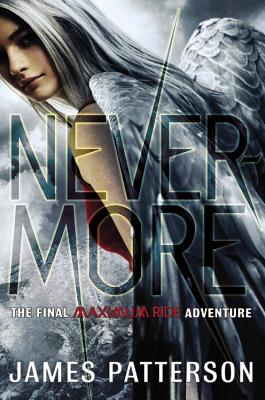 This is book number 8 in the Maximum Ride series.

This is it: one last incredible, explosive Maximum Ride adventure with an astonishing ending no one could have seen coming.
Maximum Ride and her faithful friends stand ready to face the two greatest threats that humankind has ever known, now combining forces in an unbeatable plot to destroy life as we know it once and for all. And this time, the enemy truly can't be stopped. The danger mounts just as Dylan has worked his way into Max's heart-but then Fang unexpectedly returns to the flock. An explosive confrontation between the two boys grows into a battle to win Max's heart, and the entire world hangs in the balance.
In this powerful and moving finale of James Patterson's epic fantasy series, fans will finally get the answers they've been waiting for-and an ending full of shock, surprises, and the greatest conclusion you never saw coming.