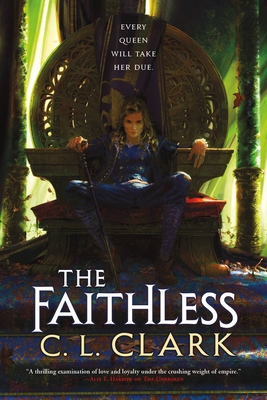 In the second installment of C.L. Clark's Magic of the Lost trilogy, soldier Touraine and princess Luca must return to Balladaire to reclaim Luca's throne and to face the consequences of dismantling an empire.

The rebels have won, and the empire is withdrawing from Qazal. But undoing the tangled web that binds the two nations will not be easy, and Touraine and Luca will face their greatest challenge yet.

Luca needs to oust her uncle from the Balladairan throne once and for all and take her rightful place as Queen. But he won't let go of power so easily. When he calls for a "Trial of Competence" and Luca's allies start disappearing from her side, she will need to find a way to prove her might. And she knows someone who can help...

Touraine has found a home in the newly free country of Qazal. But she soon realizes that leading a country and leading a revolution are two very different tasks. And, even more importantly, if Luca's uncle doesn't ratify the treaty, the Qazali could end up right back where they started.

Together, the two women will have to come overcome their enemies, their history, and their heartbreak in order to find a way to secure Luca's power and Touraine's freedom.

Cherae graduated from Indiana University's creative writing MFA. She's been a personal trainer, an English teacher, and an editor, and is some combination thereof as she travels the world. When she's not writing or working, she's learning languages, doing P90something, or reading about war and [post-]colonial history. Her short fiction has appeared in Beneath Ceaseless Skies, FIYAH, PodCastle and Uncanny. You can follow her on Twitter @c_l_clark.

Praise for The Unbroken:

“C.L. Clark gives us an unflinching story of colonialism and revolution and the people caught between. The Unbroken grabs you by the collar, breaks your heart over its knee and mends it. An astonishing debut.” ―Andrea Stewart, author of The Bone Shard Daughter

"Rife with political, familial, and romantic tension, The Unbroken is a riveting epic fantasy about a city on the knife's edge of rebellion, a tangle of alliances, and a desperate search for magic and hope.” ―K.A. Doore, author of The Perfect Assassin

"The Unbroken grabs you by the throat and doesn't let go. A perfect military fantasy: brutal, complex, human, and impossible to put down." ―Tasha Suri, author of The Jasmine Throne

"The Unbroken is a thrilling examination of love and loyalty under the crushing weight of empire. It's high adventure on a human scale―don't miss it." ―Alix E. Harrow, author of The Ten Thousand Doors of January

"This strong debut is filled with exciting action and worldbulding, intriguing characters dealing with themes of colonization, military conscription and indoctrination, and an explosion of feelings. Readers will be clamoring for more of Touraine and Luca before they finish." ―Library Journal

"Clark conjures an elaborate fantasy world inspired by Northern Africa and delves into an international political conflict that draws on real histories of colonialism and conquest in their excellent debut... Clark’s precise, thorough worldbuilding allows this remarkable novel to dive deep into the intricate workings of colonialism, exposing how power structures are maintained through social conditioning and exploring the emotional toll of political conflict. The result is a captivating story that works both as high fantasy and skillful cultural commentary." ―Publishers Weekly

"Clark's worldbuilding continues to grow...the sequel to The Unbroken extends the deliberate journey towards independence from an empire and the past, and the love in two women’s hearts."—Library Journal