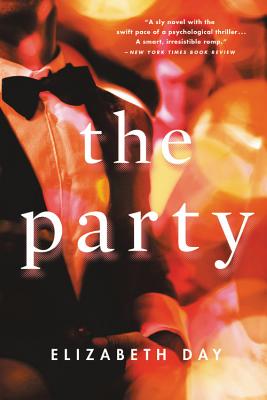 A taut psychological tale of obsession and betrayal set over the course of a dinner party.

Ben, who hails from old money, and Martin, who grew up poor but is slowly carving out a successful career as an art critic, have been inseparable since childhood. Ben's wife Serena likes to jokingly refer to Martin as Ben's dutiful Little Shadow.

Lucy is a devoted wife to Martin, even as she knows she'll always be second best to his sacred friendship. When Ben throws a lavish 40th birthday party as his new palatial country home, Martin and Lucy attend, mixing with the very upper echelons of London society.

But why, the next morning, is Martin in a police station being interviewed about the events of last night? Why is Lucy being forced to answer questions about his husband and his past? What exactly happened at the party? And what has bound these two very different men together for so many years?

A cleverly built tour of intrigue, The Party reads like a novelistic board game of Clue, taking us through the various half-truths and lies its characters weave, as the past and present collide in a way that its protagonists could never have anticipated.

Elizabeth Day grew up in Northern Ireland. She is an award-winning journalist and has written extensively for the Telegraph, the Times, the Guardian, the Observer, Vogue, Elle, and the Evening Standard.

"In this psychological page-turner, a deeply buried secret that ties two married couples together comes to a head during one lavish 40th birthday party."—Entertainment Weekly

"By page one of this devious, witty, thrilling book, you'll be as haplessly seduced by Ben Fitzmaurice's glamorous lifestyle as his old classmate, Martin Gilmour."—Refinery29

"[Martin] makes for a deliciously untrustworthy narrator; seemingly candid, but at the same time never telling the full story, perhaps because he's so good at keeping secrets.... Brimming with betrayal, corruption and hypocrisy, The Party is a gripping page-turner."—The Guardian

"Superb--clever, gripping, psychologically acute."
—Laura Barnett, author of The Versions of Us

"Day's latest novel is sinister and seductive and nothing short of breathtaking."
—Francesca Segal, author of The Innocents

"Think Brideshead Revisited meets The Talented Mr. Ripley with a dash of The Riot Club. I couldn't put it down."
—Louise O'Neill, author of Asking For It

"I practically murdered this book in an evening I loved it so much. THE PARTY is a terrifying, hilarious, brilliantly written original with a wit to die for."—Phoebe Waller-Bridge, creator and star of Fleabag

Martin is a spellbinding storyteller who doles out details like they're a controlled substance... his narration is littered with keen yet cutting observations about people, their relationships, and society at large....Vividly sketched characters and evocative prose further distinguish the story, which ends on a note that both shocks and gratifies. Day's latest is a dark, haunting, and elegantly crafted tale of obsession, desperation, devastation, and rebirth."—Kirkus (starred review)

"This is a dark and compelling book of lifelong obsessions, jealousies and neuroses; of acute psychological complaint, of dissatisfactions, of isolation, loneliness and solipsistic rage."—The Observer

"A deft thriller.... Literary flashbacks, which can be jarring or even confusing, are masterfully illuminating in The Party: They tighten the tension and lead the reader naturally to the next clue or curiosity.... The Party is well-rounded and satisfying, not only as an accomplished page-turning mystery, but also for its in-depth examination of class, of marriage and friendship, and of deception, loyalty and ambition."—St. Louis Post Dispatch