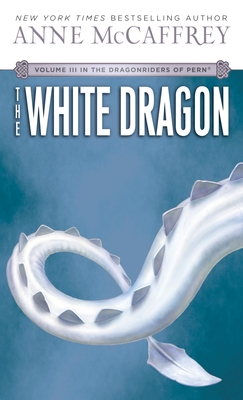 This is book number 3 in the Pern series.

Volume III of The Dragonriders of Pern®, the influential series by sci-fi/fantasy titan Anne McCaffrey

Never in the history of Pern has there been a dragon like Ruth. Mocked by other dragons for his small size and pure white color, Ruth is smart, brave, and loyal—qualities that he shares with his rider, the young Lord Jaxom. Unfortunately, Jaxom is also looked down upon by his fellow lords, and by other riders as well. His dreams of joining the dragonriders in defending Pern are dismissed. What else can Jaxom and Ruth do but strike out on their own, pursuing in secret all they are denied? But in doing so, the two friends will find themselves facing a desperate choice—one that will push their bond to the breaking point . . . and threaten the future of Pern itself.

Anne McCaffrey, one of the world’s most popular authors, is best known for her Dragonriders of Pern® series. She was the first woman to win the two top prizes for science fiction writing, the Hugo and Nebula awards. She was also given the American Library Association’s Margaret A. Edwards Award for Lifetime Literary Achievement in Young Adult Fiction, was inducted into the Science Fiction Hall of Fame, and was named a Science Fiction Writers of America Grand Master. Born in Cambridge, Massachusetts, in 1926, McCaffrey relocated to Ireland in the 1970s, where she lived in a house of her own design, named Dragonhold-Underhill. She died in 2011.