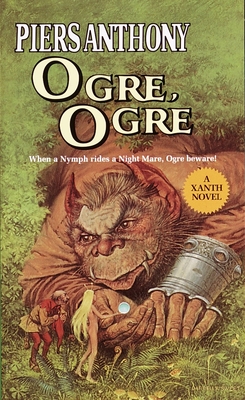 By Piers Anthony
$7.99
Email or call for price.

This is book number 5 in the Xanth series.

When a Nymph rides a Night Mare, Ogre beware!

Smash knew all about ogres. After all, despite his having a human mother, Smash was an ogre himself. Ogres were not only huge and horribly ugly, as Smash was; they were also so stupid they could hardly speak, and they spent most of their time fighting, destroying, and eating young girls.

So what was he doing here with seven assorted females looking to him to guide them and save them? Even in Xanth, where magic made anything possible, why should Tandy the Nymph trust him and seem fond of him? And how could all that high-flown conversation be coming out of his mouth?

But that, it seemed, was what he got for going to Good Magician Humfrey for an Answer—before he even knew what the Question was!