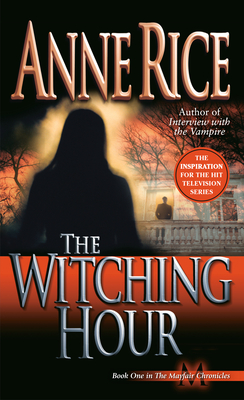 This is book number 1 in the Lives of Mayfair Witches series.

From the author of the extraordinary Vampire Chronicles comes a huge, hypnotic novel of witchcraft and the occult through four centuries.

Demonstrating, once again, her gift for spellbinding storytelling and the creation of legend, Anne Rice makes real for us a great dynasty of witches--a family given to poetry and to incest, to murder and to philosophy; a family that, over the ages, is itself haunted by a powerful, dangerous, and seductive being.

On the veranda of a great New Orleans house, now faded, a mute and fragile woman sits rocking . . . and The Witching Hour begins.

It begins in our time with a rescue at sea.  Rowan Mayfair, a beautiful woman, a brilliant practitioner of neurosurgery--aware that she has special powers but unaware that she comes from an ancient line of witches--finds the drowned body of a man off the coast of California and brings him to life.  He is Michael Curry, who was born in New Orleans and orphaned in childhood by fire on Christmas Eve, who pulled himself up from poverty, and who now, in his brief interval of death, has acquired a sensory power that mystifies and frightens him.

As these two, fiercely drawn to each other, fall in love and--in passionate alliance--set out to solve the mystery of her past and his unwelcome gift, the novel moves backward and forward in time from today's New Orleans and San Francisco to long-ago Amsterdam and a château in the France of Louis XIV.  An intricate tale of evil unfolds--an evil unleashed in seventeenth-century Scotland, where the first "witch," Suzanne of the Mayfair, conjures up the spirit she names Lasher . . . a creation that spells her own destruction and torments each of her descendants in turn.

From the coffee plantations of Port au Prince, where the great Mayfair fortune is made and the legacy of their dark power is almost destroyed, to Civil War New Orleans, as Julien--the clan's only male to be endowed with occult powers--provides for the dynasty its foothold in America, the dark, luminous story encompasses dramas of seduction and death, episodes of tenderness and healing.  And always--through peril and escape, tension and release--there swirl around us the echoes of eternal war: innocence versus the corruption of the spirit, sanity against madness, life against death.  With a dreamlike power, the novel draws us, through circuitous, twilight paths, to the present and Rowan's increasingly inspired and risky moves in the merciless game that binds her to her heritage. And in New Orleans, on Christmas Eve, this strangest of family sagas is brought to its startling climax.

Anne Rice is the author of thirty-seven books, including the Vampire Chronicles, the Lives of the Mayfair Witches, and the Wolf Gift book series. Rice was born in New Orleans in 1941 and grew up there and in Texas. She lived in San Francisco with her husband, the poet and painter, Stan Rice until 1988, when they returned to New Orleans to live with their son, Christopher. In 2006, Rice moved to Rancho Mirage, California. She died in 2021.