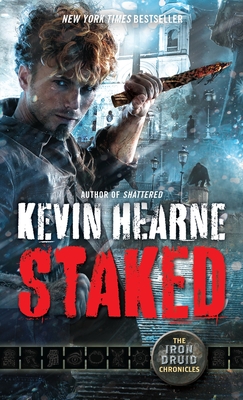 This is book number 8 in the The Iron Druid Chronicles series.

NEW YORK TIMES BESTSELLER • In the eighth book in The Iron Druid Chronicles, two-thousand-year-old Druid Atticus O’Sullivan faces the clan of vampires who have been bent on destroying him—including Leif, his former best friend turned enemy.

When a Druid lives as long as Atticus does, he’s bound to run afoul of a few vampires—make that legions of them. Even his former friend and legal counsel turned out to be a bloodsucking backstabber. Now the toothy troublemakers—led by power-mad pain-in-the-neck Theophilus—are no longer content to live undead and let live. Atticus needs to make a point—and drive it into a vampire’s heart.

As always, Atticus wouldn’t mind a little backup. But his allies have problems of their own. Ornery archdruid Owen Kennedy is having a wee bit of troll trouble: Turns out when you stiff a troll, it’s not water under the bridge. Meanwhile, Granuaile is desperate to free herself of the Norse god Loki’s mark and elude his powers of divination—a quest that will bring her face-to-face with several Slavic nightmares.

As Atticus globe-trots to stop his vampire nemesis, the journey leads to Rome. What better place to end an immortal than the Eternal City? But poetic justice won’t come without a price: In order to defeat Theophilus, Atticus may have to lose an old friend.