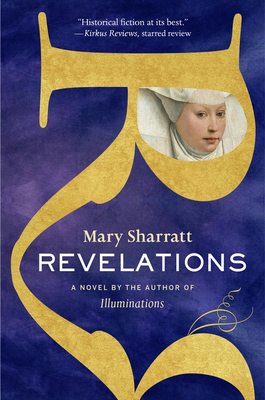 Bishop’s Lynn, England, 1413. At the age of forty, Margery Kempe has nearly died giving birth to her fourteenth child. Fearing that another pregnancy might kill her, she makes a vow of celibacy, but she can’t trust her husband to keep his end of the bargain. Desperate for counsel, she visits the famous anchoress Dame Julian of Norwich.

Pouring out her heart, Margery confesses that she has been haunted by visceral religious visions. Julian then offers up a confession of her own: she has written a secret, radical book about her own visions, Revelations of Divine Love. Nearing the end of her life and fearing Church authorities, Julian entrusts her precious book to Margery, who sets off the adventure of a lifetime to secretly spread Julian's words.

Mary Sharratt vividly brings the medieval past to life as Margery blazes her trail across Europe and the Near East, finding her unique spiritual path and vocation. It’s not in a cloistered cell like Julian, but in the full bustle of worldly existence with all its wonders and perils.

MARY SHARRATT, the author of seven critically acclaimed novels, is on a mission to write strong women back into history. Her novels include Daughters of the Witching Hill, the Nautilus Award–winning Illuminations: A Novel of Hildegard von Bingen,The Dark Lady’s Mask: A Novel of Shakespeare’s Muse, and Ecstasy, about the life, loves, and music of Alma Mahler. She is an American who lives in Lancashire, England.

“Intense . . . Margery’s faith and emotions are rich on the page.” —Publishers Weekly

“This book gives the reader inspiration to realize all she accomplished in her society. If Kempe was able to travel the world, write a book, and forge her own path, we should be able to do the same . . . [Sharrat] has brought Margery Kempe back to life and made her an inspiration for us all.”  —Christian Feminism Today

“Sharratt evokes the sights and smells of medieval England as viscerally as she does Margery’s divine ecstasy, immersing readers in both her inner and outer journeys . . . Revelations will appeal to any reader interested in tales driven by a flawed woman with a certain purpose.” —Booklist

“Mystic or madwoman? Mary Sharrat makes this controversial woman a sympathetic character, defined and defied by the time in which she lived. Revelations is filled with fascinating details about the perils of the fifteenth-century pilgrim road, especially for a woman daring enough to travel it alone.” —Donna Woolfolk Cross, internationally best-selling author of Pope Joan

“Considered through the female gaze, Margery Kempe’s travels and travails take on new significance as she undertakes a dangerous mission for Julian of Norwich in a time of Lollard persecution and a misogynist Church patriarchy. Thriller, domestic tragedy, medieval travelogue, meditation on a woman’s spiritual awakening, Revelations pulses with life. A gem of a book. Highly recommended!” —Candace Robb, author of the best-selling Owen Archer mysteries

“Mary Sharratt’s Revelations is a book worthy of its fascinating subject. A deeply imaginative and empathetic novel, full of surprises and delights.” —Bruce Holsinger, USA Today best-selling author of The Gifted School and A Burnable Book

“In this beautifully rendered tale, Mary Sharratt has managed to capture the ecstatic and vulnerable wisdom of the holy madwoman, Margery Kempe, and distill the quintessence of feminine wisdom. I love the way she weaves the radically optimistic teachings of Julian of Norwich into Margery’s journey. Revelations brings these two medieval luminaries to life with startling relevance for our times.” —Mirabai Starr, translator of The Showings of Julian of Norwich and author of Wild Mercy

“Revelations brings to vivid life Margery Kempe and her world with all its riotous color, conflicting religious beliefs, deadly perils, saints and sinners. In Sharratt’s skillful reimagining of Kempe’s travels and travails she gives us a Margery Kempe who is not only wife, mother, steadfast pilgrim, and surely one of the most remarkable women of her time, but also an implausible yet endearing heroine. Sometimes incredible, sometimes bizarre, Revelations is a fascinating journey into both the medieval world and the medieval mind.” —Patricia Bracewell, author of The Steel Beneath the Silk​