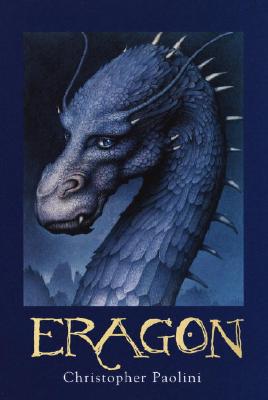 By Christopher Paolini
$20.99
Email or call for price.

This is book number 1 in the Inheritance Cycle (Hardcover) series.

When Eragon finds a polished blue stone in the forest, he thinks it is the lucky discovery of a poor farm boy; perhaps it will buy his family meat for the winter. But when the stone brings a dragon hatchling, Eragon realizes he has stumbled upon a legacy nearly as old as the Empire itself. Overnight his simple life is shattered, and he is thrust into a perilous new world of destiny, magic, and power. With only an ancient sword and the advice of an old storyteller for guidance, Eragon and the fledgling dragon must navigate the dangerous terrain and dark enemies of an Empire ruled by a king whose evil knows no bounds. Can Eragon take up the mantle of the legendary Dragon Riders? The fate of the Empire may rest in his hands….

Christopher Paolini's abiding love of fantasy and science fiction inspired him to begin writing his debut novel, Eragon, when he graduated from high school at fifteen. Now nineteen, he lives with his family in Paradise Valley, Montana, where he is at work on Eldest, the next volume in the Inheritance trilogy.

“Full praise to Eragon, and I want more! A winner . . . tip of the hat to young master Paolini.”—Anne McCaffrey, author of The Dragonriders of Pern series

“An authentic work of great talent . . . I found myself dreaming about it at night, and reaching for it as soon as I woke.” ─Liz Rosenberg, The New York Times Book Review

“Unusual, powerful . . . fresh and fluid. An impressive start to a writing career that’s sure to flourish.” —Booklist, Starred

“An auspicious beginning to both career and series.”—Publishers Weekly