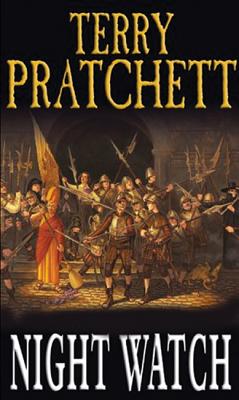 A new stage adaptation of one of Pratchett's best-selling novels

Set in Ankh-Morpork one of the most thoroughly imagined cities in fantasy, Night Watch is the story of Sam Vimes, running hero of the Guards sequence, who finds himself cast back in time to the Ankh-Morpork of his youth. With a psychopath from his own time rising in the vile ranks of the Cable Street Unmentionables complicating things, Vimes has to ensure that history takes its course so that he will have the right future to go back to, and to keep his younger self alive.One of the funniest English authors alive (Independent)

Terry Pratchett is one of the most popular authors writing today. He lives behind a keyboard in Wilt shire and says he 'doesn't want to get a life, because it feels as though he's trying to lead three already'. He was appointed OBE in 1998. He is the author of the phenomenally successful Discworld se ries and his trilogy for young readers, The Bromeliad, is scheduled to be adapted into a spectacular animated movie. His latest book, The Truth, is the 25th novel in the Discworld series.

"One of the funniest English authors alive."—Independent