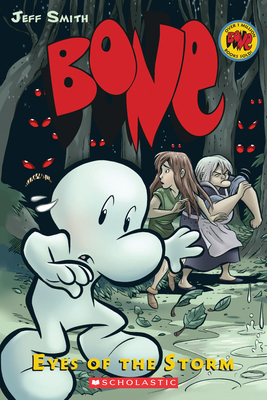 This is book number 3 in the Bone series.

Jeff Smith's New York Times and USA Today bestselling, award-winning BONE books are one of the most popular graphic novel series of all time!

Life in the Valley isn’t getting any easier for the Bones and their newfound friends. Lucius, Smiley, and Phoney are attacked by the Rat Creatures and barely make it back to Lucius's tavern. It doesn’t take long before Phoney is back to his old tricks.

Over at the farm, Fone Bone and Thorn are troubled by strange dreams, and Gran'ma Ben's reaction to them is even stranger, as she reveals long-kept secrets and unexpected dangers. Thorn, Fone Bone, and Gran'ma Ben might have to leave the farm forever!

Jeff Smith is the creator of the award-winning, New York Times bestselling BONE series. He was born and raised in the American Midwest and learned about cartooning from comic strips, comic books, and TV animation. Visit him online at boneville.com.

Praise for the BONE series:

★ "This is first-class kid lit: exciting, funny, scary, and resonant enough that it will stick with readers for a long time." -- Publishers Weekly, starred review

"A true accomplishment. Not only is it a terrific graphic-novel series, but it's a superb example of storytelling." -- School Library Journal

"BONE is storytelling at its best, full of endearing, flawed characters whose adventures run the gamut from hilarious whimsy to thrilling drama." -- Entertainment Weekly

"Jeff Smith can pace a joke better than almost anyone in comics." -- Neil Gaiman, winner of the Newbery Medal for The Graveyard Book

SLJGr 3 Up–Exiled from their home, the Bone cousins have discovered a beautiful but frightening world in the valley. The tone darkens in this volume as their friend Thorn learns of her tragic past, the bloodthirsty rat creatures become even more menacing, and war appears imminent. Already a gripping, striking work in black and white, Bone is even more appealing in color. The lighter palettes highlight the story's playful humor, while darker shades heighten the immense drama unfolding in the valley. This offering should bring Smith's work a deservedly wider audience.–Lisa Goldstein, Brooklyn Public Library, NY