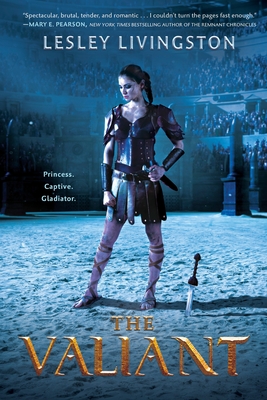 This is book number 1 in the Valiant series.

Fallon is the daughter of a proud Celtic king and the younger sister of the legendary fighter Sorcha. When Fallon was just a child, Sorcha was killed by the armies of Julius Caesar.

On the eve of her seventeenth birthday, Fallon is excited to follow in her sister's footsteps and earn her place in her father's war band. She never gets the chance.

Fallon is captured and sold to an elite training school for female gladiators—owned by none other than Julius Caesar himself. In a cruel twist of fate, the man who destroyed Fallon’s family might be her only hope of survival.

Now, Fallon must overcome vicious rivalries, deadly fights in and out of the arena, and perhaps the most dangerous threat of all: her irresistible feelings for Cai, a young Roman soldier and her sworn enemy.

A richly imagined fantasy for fans of Sarah J. Maas and Cinda Williams Chima, The Valiant recounts Fallon’s gripping journey from fierce Celtic princess to legendary gladiator and darling of the Roman empire.

Lesley Livingston is an award-winning author of teen fiction, best known for her Wondrous Strange trilogy. She holds a master's degree in English from the University of Toronto and was a principal performer in a Shakespearean theatre company, specializing in performances for teen audiences, for more than a decade. Visit her at www.lesleylivingston.com and follow her on Twitter @LesLivingston.

"Livingston has written an exciting and absorbing tale that is deftly paced and deliciously detailed." —Booklist

“This title manages to weave political intrigue and pitch-perfect dialogue with gladiatorial combat in a way that will engage fans of all genres.” —School Library Connection

“It’s easy to be swept into this ambitious novel that offers romance, ferocious battles, political intrigue, and even an appearance from Cleopatra.”-BCCB

“The Valiant has everything I love in a book: danger, violence, and a badass protagonist with a sword.”
—Julie Kagawa, New York Times bestselling author of the Iron Fey series

"Set in ancient Rome; this fierce tale of becoming a female gladiator grabs hold of your heart-strings and doesn't let go until its spell-binding conclusion. Lush and adventurous, THE VALIANT is the girl power novel we've all been waiting for." —Summer Webb, ButterMyBooks

“During a time of political unrest in Ancient Rome, this captivating story explores one girl's quest for honor--and how each of us must choose how to define it. Fallon and her sisterhood of girl gladiators flip power dynamics in thrilling ways, particularly through stunning action sequences and lethal combat scenes. Long after I turned the final page, I could feel chariot wheels vibrating beneath my feet and blood lust burning in my veins. THE VALIANT is nothing short of spectacular, and I cannot wait to watch it set the world on fire.” —Wendy Darling, The Midnight Garden

“Lesley Livingston’s THE VALIANT had me entranced from the first page with her vivid descriptions and kick-ass heroine Fallon. We follow her journey from Celtic princess to being a female gladiator in ancient Rome. Livingston weaves themes of betrayal, loyalty and family into a story rich in action scenes and battles of will.” —Kristen Williams, My Friends Are Fiction

“THE VALIANT is an illustrative novel as brutal as it is beautiful. A riveting blend of an explosive storyline, a forbidden romance, and the valiance of an unbreakable sisterhood in a ruthless period of history. Gladiatrices, betrayal, honor and freedom—need I say more about this rich page-turner?”
—Hafsah Faizal, IceyBooks

"A courageous and action-packed story that defines sisterhood and the meaning behind honor, THE VALIANT captivated me from the first page to the very last. This book will leave you feeling empowered and ready to take on the world yourself." —Carmen Seda, Oh the Book Feels

“Following a fierce heroine who desires blood and vengeance for her warlord sister's death, Leslie Livingston's take on the female gladiators of Rome is bloody, exhilarating, and poignant.” —Thea James, The Book Smugglers

“Sensational! THE VALIANT has everything I love! A strong heroine, a romance that swept me off my feet, gladiator battles, lush world building, and a rich Roman history. This is a beautifully told, captivating story I enjoyed every moment reading. I didn't want this book to end.” —Katie Bartow, Mundie Moms