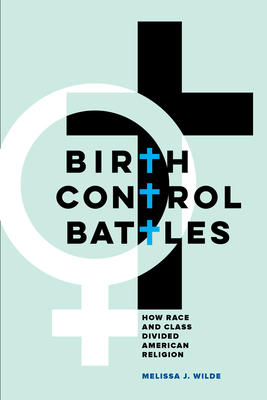 Conservative and progressive religious groups fiercely disagree about issues of sex and gender. But how did we get here? Melissa J. Wilde shows how today’s modern divisions began in the 1930s in the public battles over birth control and not for the reasons we might expect. By examining thirty of America’s most prominent religious groups—from Mormons to Methodists, Southern Baptists to Seventh Day Adventists, and many others—Wilde contends that fights over birth control had little do with sex, women’s rights, or privacy.

Using a veritable treasure trove of data, including census and archival materials and more than 10,000 articles, statements, and sermons from religious and secular periodicals, Wilde demonstrates that the push to liberalize positions on contraception was tied to complex views of race, immigration, and manifest destiny among America’s most prominent religious groups. Taking us from the Depression era, when support for the eugenics movement saw birth control as an act of duty for less desirable groups, to the 1960s, by which time most groups had forgotten the reasons behind their stances on contraception (but not the concerns driving them), Birth Control Battles explains how reproductive politics divided American religion. In doing so, this book shows the enduring importance of race and class for American religion as it rewrites our understanding of what it has meant to be progressive or conservative in America.

Melissa J. Wilde is a sociologist at the University of Pennsylvania. Her first book, Vatican II, won the Distinguished Book Award from the Society for the Scientific Study of Religion. Although most of Wilde’s research has focused on religious change, her most recent research—which she describes as the study of “complex religion”—focuses on what has not changed within American religion, in particular, the enduring ways that it intersects with race, class, and gender today.

"For observers of American religion who are left scratching their heads at the state of contemporary American religion, race relations, and reproductive politics, Birth Control Battles is an essential read."
— Sociology of Religion: A Quarterly Review

"Wilde’s Birth Control Battles is a thoroughly enlightening and impressively researched book . . .Her monograph is a landmark contribution to scholarship on modern American religion and politics with a critically important perspective on the roots of contemporary and ongoing debates over reproductive rights, religious freedom, and privacy."

“Birth Control Battles is a gift to scholars of religion, gender, class, and immigration who work from both historical and sociological perspectives, modelling precise qualitative methods and careful reading and interpretation.”

"This book accomplishes exactly what it sets out to do: Wilde produces an impeccable account of the doctrinal trajectories ofU.S. denominations on the birth-control issue, questioning widespread assumptions about present-day alignments. She also raises the bar for design, rigor, and clarity in comparative historical research."