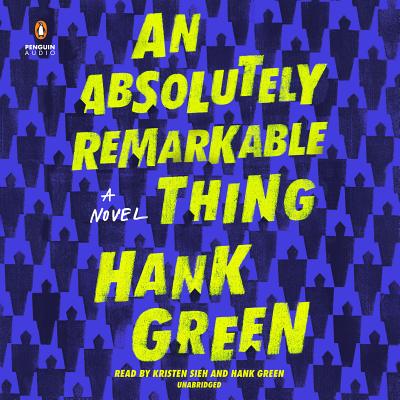 This is book number 1 in the The Carls series.

“This book is so much fun. When April May stumbles across the first ‘Carl,’ she initially thinks it’s an art installation. It turns out these giant statues turned up overnight in major cities around the globe. Due to the viral video she made with her friend Andy, April May finds herself in the middle of a worldwide conversation and trying to manage her newfound celebrity status. Green is an excellent storyteller and has delivered a great coming-of-age/sci-fi debut novel.”
— Jennifer Hill, Powell's Books, Portland, OR

In his much-anticipated debut novel, Hank Green--cocreator of Crash Course, Vlogbrothers, and SciShow--spins a sweeping, cinematic tale about a young woman who becomes an overnight celebrity before realizing she's part of something bigger, and stranger, than anyone could have possibly imagined.

Roaming through New York City at three a.m., twenty-three-year-old April May stumbles across a giant sculpture. Delighted by its appearance and craftsmanship--like a ten-foot-tall Transformer wearing a suit of samurai armor--April and her friend, Andy, make a video with it, which Andy uploads to YouTube. The next day, April wakes up to a viral video and a new life. News quickly spreads that there are Carls in dozens of cities around the world--from Beijing to Buenos Aires--and April, as their first documentarian, finds herself at the center of an intense international media spotlight.

Seizing the opportunity to make her mark on the world, April now has to deal with the consequences her new particular brand of fame has on her relationships, her safety, and her own identity. And all eyes are on April to figure out not just what the Carls are, but what they want from us.

Compulsively entertaining and powerfully relevant, An Absolutely Remarkable Thing grapples with big themes, including how the social internet is changing fame, rhetoric, and radicalization; how our culture deals with fear and uncertainty; and how vilification and adoration spring for the same dehumanization that follows a life in the public eye. The beginning of an exciting fiction career, An Absolutely Remarkable Thing is a bold and insightful novel of now.

Hank Green is the #1 New York Times bestselling author of An Absolutely Remarkable Thing. He's also the CEO of Complexly, a production company that creates educational content, including Crash Course and SciShow, prompting The Washington Post to name him "one of America's most popular science teachers." Complexly's videos have been viewed more than two billion times on YouTube. Green cofounded a number of other small businesses, including DFTBA.com, which helps online creators make money by selling cool stuff to their communities; and VidCon, the world's largest conference for the online video community. In 2017, VidCon drew more than forty thousand attendees across three events in Anaheim, Amsterdam, and Australia. Hank and his brother, John, also started the Project for Awesome, which last year raised more than two million dollars for charities, including Save the Children and Partners in Health. Hank lives in Montana with his wife, son, and cat.

“An Absolutely Remarkable Thing is a thrilling journey that takes a hard look at the power of fame and our willingness to separate a person from the brand. Green manages to blend humor, mystery and science fiction in his fast-paced debut novel.”
—Associated Press

“A deceptively romp-y novel about mysterious samurai alien robot statues appearing all at once, everywhere that has hidden and absolutely remarkable depths....Green's understanding of the power and limits of social media is incomparable; what Douglas Coupland did for the elation and misery of the tech-bubble with Microserfs, Green does for YouTubers and other social media stars. It makes for a novel that's always charming, always fast-paced, but which is sneakily and uncomfortably ambivalent about the things it celebrates. It gallops to a startling and great ending (I read it all in one sitting) and lingers afterwards.”
—Cory Doctorow, BoingBoing

“[An Absolutely Remarkable Thing] is perhaps as honest a look as we will ever get into the phenomenon of cyberfame, and Green balances this careful introspection with a plotline that is both fun and mysterious, puzzling and compelling… Green quickly proves himself adept not only at playing into our 2018 anxiety and love/hate relationship with social media, but also at driving suspense, world-building and a true love for science fiction.”
—Bookreporter

“With this comic story about the ugly side of Internet fame, Green gives his brother...a run for his money.”
—People

“[Green] applies wit, affection, and cultural intelligence to a comic sci-fi novel....A fun, contemporary adventure that cares about who we are as humans, especially when faced with remarkable events.”
—Kirkus Reviews (starred review)

“Green makes an entertaining book debut in this fast-paced, witty first contact novel…At once funny, exciting, and a tad terrifying, this exploration of aliens and social media culture is bound to have wide appeal to readers interested in either theme.”
—Booklist (starred review)

“A captivating debut from a talented new novelist.”
—Bustle

“Sparkling with mystery, humor and the uncanny, this is a fun read. But beneath its effervescent tone, more complex themes are at play.”
—San Francisco Chronicle

“It’s not in the nature of a sci-fi comedy blockbuster to shift boulders in your soul. But with his debut novel, An Absolutely Remarkable Thing, Hank Green pulls it off....There are still a few exceptionally remarkable things that rise above the rest of their absolutely remarkable peers. In the pages of An Absolutely Remarkable Thing, April’s discovery of New York Carl is one of these exceptions; in the real world, Green’s debut deserves to be another. [It] delivers unexpected delights and pathos…you will feel smarter and more complete for having read it.”
—Paste Magazine, 12 Best Novels of 2018

“Green’s debut novel is an adventurous romp that combines science fiction and interpersonal drama to explore identity, relationships, a polarized world and the influence of media and popular opinion. An Absolutely Remarkable Thing is a fun, fast read that invites readers to contemplate their position in the modern world.”
—BookPage

“An Absolutely Remarkable Thing is an extremely fun read. At every turn, you’ll be dying to know what happens next.”
—Hello Giggles

“Packed with meditations on the nature of celebrity, social media, and the cultural response to the unknown.”
—Harper's Bazaar

“The genius of Hank Green's book lies in the way he skillfully mixes such a variety of topics and messages and melds them brilliantly into a gem of a first novel.”
—News Tribune

“Both thought-provoking and entertaining… a laugh-out-loud, fast-paced story that is just plain fun to read.”
—Shelf Awareness

“Surprises in its willingness to delve into the unknown and the unknowable, exploring how modern internet fame twists and chops reality and peoples’ lives via the story of twenty-something April May.”
—B&N Sci-Fi & Fantasy Blog

“[A] smashing, fantastical debut... Step aside, John Green—it's time for Hank to take over the literary world.”
—PopSugar, Best Books 2018

“You're about to meet somebody named April May who you're immediately going to want to be best friends with. And bonus, she spends all her time having incredible adventures with giant robots and dream puzzles and accidental Internet fame. An Absolutely Remarkable Thing is pure book-joy.”
—Lev Grossman, #1 New York Times bestselling author of the Magicians Trilogy

“Fun and full of truth. To be honest, I'm a little irritated at how good the book is. I don't need this kind of competition.”
—Patrick Rothfuss, #1 New York Times bestselling author of The Kingkiller Chronicle

“This is the book my teen self would have loved, and my adult self immediately obsessed over. I turned the pages of An Absolutely Remarkable Thing so quickly the pads of my thumbs were worn smooth by the time I finished it. It provokes the mind, tickles the spirit, and April May is the terribly relevant young protagonist we've been waiting for.”
—Ashley C. Ford, writer

“Funny, thrilling, and an absolute blast to read. I knew Hank would be good at this, but I didn't know he would be this good on the first try.”
—John Scalzi, New York Times bestselling author and Hugo Award winner

“By turns joyful, devastating, personal, zeitgeisty, modern, classic, fast-paced, and thoughtful, An Absolutely Remarkable Thing blew me away with its fresh take on first contact in this fragile, ever-connected world we live in. Quick but never shallow, it will stand as a snapshot of an era as well as just a darn good read.”
—Catherynne M. Valente, author of The Refrigerator Monologues and Space Opera

“Hank Green hasn't just written a great mystery adventure (though he has), and he hasn't just written the most interesting meditation on the internet and fame I've ever seen (but he did that too), Hank has written a book in which the page-turning story and the fascinating ideas inform and support each other. This book expands your mind while taking you on a hell of a ride.”
—Joseph Fink, author of Welcome to Night Vale and Alice Isn't Dead