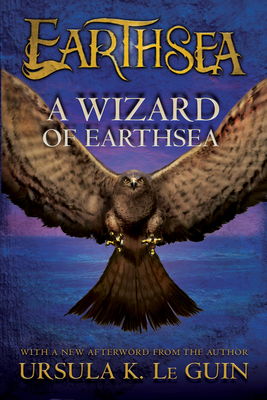 This is book number 1 in the The Earthsea Cycle series.

The first novel of Ursula K. Le Guin's must-read Earthsea Cycle. "The magic of Earthsea is primal; the lessons of Earthsea remain as potent, as wise, and as necessary as anyone could dream." (Neil Gaiman)

Ged was the greatest sorcerer in Earthsea, but in his youth he was the reckless Sparrowhawk. In his hunger for power and knowledge, he tampered with long-held secrets and loosed a terrible shadow upon the world.

This is the tumultuous tale of his testing, how he mastered the mighty words of power, tamed an ancient dragon, and crossed death's threshold to restore the balance.

With stories as perennial and universally beloved as The Chronicles of Narnia and The Lord of The Rings—but also unlike anything but themselves—Ursula K. Le Guin’s Earthsea novels are some of the most acclaimed and awarded works in literature. They have received accolades such as the National Book Award, a Newbery Honor, the Nebula Award, and many more honors, commemorating their enduring place in the hearts and minds of readers and the literary world alike.

Join the millions of fantasy readers who have explored these lands. As The Guardian put it: "Ursula Le Guin's world of Earthsea is a tangled skein of tiny islands cast on a vast sea. The islands' names pull at my heart like no others: Roke, Perilane, Osskil . . ."

URSULA K. LE GUIN was born in Berkeley, California, in 1929, and passed away in Portland, Oregon, in 2018. She published over sixty books of fiction, nonfiction, poetry, drama, children’s literature, and translation. She was the recipient of a National Book Award, six Hugo and five Nebula awards, and was inducted into the American Academy of Arts and Letters.

"The magic of Earthsea is primal; the lessons of Earthsea remain as potent, as wise, and as necessary as anyone could dream."—Neil Gaiman, author of The Sandman

"New and longtime Earthsea fans will be drawn to these impressive new editions."—Horn Book —