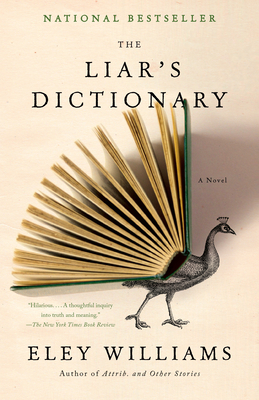 When Eley Williams starts the preface of their novel by asking the reader to imagine their own perfect, personal dictionary (print version only, it must have meaningful heft to be useful) you know that you are in the hands of a passionate, brilliant and funny word nerd.  Part mystery, part romance and 100% love letter to the majesty and quirkiness of language and those who cherish it from past to present.  The Liar's Dictionary is a delight!

“The Liar’s Dictionary is an enormously charming novel about putting the world into words. Its two logophilic heroes, separated by a century, are unforgettable characters; I loved spending time with these word-curious creations. You’ll be utterly transported by this playful and seriously funny book.”
— John Francisconi, McNally Jackson City Point, Brooklyn, NY

“Williams has crafted a text that does more than spin a great yarn. It will lead you, like a will-o’-the-wisp, into a mysterious new realm: the fascinating study of words both real and fake.”
— Terrance Hudson, Epilogue: Books Chocolate Brews, Chapel Hill, NC

NATIONAL BESTSELLER • “You wouldn’t expect a comic novel about a dictionary to be a thriller too, but this one is. In fact, [it] is also a mystery, love story (two of them) and cliffhanging melodrama.” —The New York Times Book Review

An award-winning novel that chronicles the charming misadventures of a lovelorn Victorian lexicographer and the young woman put on his trail a century later to root out his misdeeds while confronting questions of her own sexuality and place in the world.

Mountweazel n. the phenomenon of false entries within dictionaries and works of reference. Often used as a safeguard against copyright infringement.

In the final year of the nineteenth century, Peter Winceworth is toiling away at the letter S for Swansby’s multivolume Encyclopaedic Dictionary. But his disaffection with his colleagues compels him to assert some individual purpose and artistic freedom, and he begins inserting unauthorized, fictitious entries. In the present day, Mallory, the publisher’s young intern, starts to uncover these mountweazels in the process of digitization and through them senses their creator’s motivations, hopes, and desires. More pressingly, she’s also been contending with a threatening, anonymous caller who wants Swansby’s staff to “burn in hell.” As these two narratives coalesce, Winceworth and Mallory, separated by one hundred years, must discover how to negotiate the complexities of life’s often untrustworthy, hoax-strewn, and undefinable path. An exhilarating, laugh-out-loud debut, The Liar’s Dictionary celebrates the rigidity, fragility, absurdity, and joy of language while peering into questions of identity and finding one’s place in the world.

ELEY WILLIAMS is a Fellow of the Royal Society of Literature. She is the author of Attrib. and Other Stories, and her work has appeared in The Penguin Book of the Contemporary British Short Story, Liberating the Canon, the Times Literary Supplement, and London Review of Books. She lives in London.

“You wouldn’t expect a comic novel about a dictionary to be a thriller too, but this one is. In fact, Eley Williams’s hilarious new book, The Liar’s Dictionary, is also a mystery, love story (two of them) and cliffhanging melodrama. . . . A thoughtful inquiry into truth and meaning.”
—The New York Times Book Review

“An audacious, idiosyncratic dual love story about how language and people intersect and connect, and about how far we'll go to save what we're passionate about…Showcases a delight in language that evokes both Nabokov and—more on point with its mix of playfulness, profundity, warmth, and heart—Ali Smith.”
—NPR

"Delightful. . . . Underneath this novel’s extremely bookish mystery is the idea that our identities are as improvisatory as the words we affix to them, and that even the dictionary, the most seemingly staid and impartial arbiter of truth, is an ‘unreliable narrator.'"
—The Wall Street Journal

"A playful paean to lexicology. . . . Although the book abounds in dramatic incident, its main focus, like the characters’, is not actions but words, and 'the transformative power of proper attention paid to small things.'"—The New Yorker

"“[The Liar’s Dictionary] resembles a bonsai tree—compact, wizened and funny. It’s about fricatives and vowels and Latin and love; it’s about updating the meanings of words like 'dyke,' 'teabag' and 'marriage.' . . . Plot is not why a reader should come to The Liar’s Dictionary. One approaches it instead for highly charged neurotic situations and for Williams’s adept word-geekery. Her esotericism is always on cheerful display."
—The New York Times

"The Liar’s Dictionary is the book I was longing for. So eudaemonical, so felicific and habile! A harlequinade of cachinnation! It's hilarious and smart and charming and I loved it. Read it. It’s the book you’re longing for."
—Andrew Sean Greer, 2018 Pulitzer Prize winner for Less

"An improbably enchanting, rollicking novel about two generations of put-upon London lexicographers, The Liar's Dictionary is positively intoxicated with the joy and wonder of language, both authentic and, often hilariously, counterfeit, and I can assure you that it's quite the contact high. Eley Williams brings erudition and playfulness—and lovely sweetness—to every page."
—Benjamin Dreyer, New York Times bestselling author of Dreyer's English

"A virtuoso performance full of charm. . . . It's simultaneously a love story, an office comedy, a sleuth mystery and a slice of gaslit late Victoriana...The Liar's Dictionary is a glorious novel—a perfectly crafted investigation of our ability to define words and their power to define us."
—The Guardian

"Perfectly calibrated. . . . For a novel as finely tuned as this, to leave one with a sense of the intoxicating hopefulness of chance is its greatest achievement in a competitive field.”
—Los Angeles Review of Books

“Wildly funny. . . . If you love words and the mysteries behind them, then you’ll likely enjoy this book.”
—The Maine Edge (Bangor)

“I’ve lost my heart to The Liar’s Dictionary. . . . A fab tale for lovers of language and mystery.”
—Kathi Wolfe, Washington Blade

"Comically inventive.The author combines a Nabokovian love of wordplay with an Ali Smith–like ability to create eccentric characters who will take up permanent residence in the reader’s heart. This is a sheer delight for word lovers."
—Publisher's Weekly (starred)

"An imaginative, funny, intriguing novel...Williams has created a supremely entertaining and edifying meditation on how language records and reflects how we see the world, and what we wish it could be."
—BookPage

"A remarkable novel...Original and often very funny, The Liar’s Dictionary is an offbeat exploration of both the delights of language and its limitations."
—Sunday Times (UK)

“Deft and clever, refreshing and rewarding. . . . An assured and satisfying writer, her language rich and intricate and her characters rounded enough to be sympathetic and lampoonist enough to be terribly funny.”
—Literary Review (London)