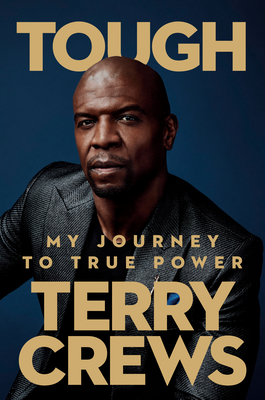 From Brooklyn Nine-Nine star Terry Crews, the deeply personal story of his lifelong obsession with strength—and how, after looking for it in all the wrong places, he finally found it

Terry Crews spent decades cultivating his bodybuilder physique and bravado. On the outside, he seemed invincible: he escaped his abusive father, went pro in the NFL, and broke into the glamorous world of Hollywood. But his fixation with appearing outwardly tough eventually turned into an exhausting performance in which repressing his emotions let them get the better of him—leading him into addiction and threatening the most important relationships in his life.

Now Crews is sharing the raw, never-before-told story of his quest to find the true meaning of toughness. In Tough, he examines arenas of life where he desperately sought control—masculinity, shame, sex, experiences with racism, and relationships—and recounts the setbacks and victories he faced while uprooting deeply ingrained toxic masculinity and finally confronting his insecurities, painful memories, and limiting beliefs. The result is not only the gripping story of a man's struggle against himself and how he finally got his mind right, but a bold indictment of the cultural norms and taboos that ask men to be outwardly tough while leaving them inwardly weak.

With Tough, Crews's journey of transformation offers a model for anyone who considers themselves a “tough guy” but feels unfulfilled; anyone struggling with procrastination or self-sabotage; and anyone ready to achieve true, lasting self-mastery.

Terry Crews is an actor best known for his action and comedy roles, including Brooklyn Nine-Nine, Everybody Hates Chris, Idiocracy, The Expendables, and America’s Got Talent. He is also a former Old Spice model and NFL player.

“There isn’t a man more qualified to prove that vulnerability is strength than Terry Crews. In this raw, revealing memoir, he chronicles his journey through abuse, anger, insecurity, and misogyny—and shows how he found a better path. If his words don’t move you to tears, you might be a robot.”
—Adam Grant, #1 New York Times bestselling author of Think Again and host of the TED podcast WorkLife

“From the fields of Flint, Michigan, to the packed arenas of the NFL and Hollywood, Terry Crews’s life is a testament to the power of physical and mental toughness. But there’s a deeper journey at work here that goes beyond one man’s story of overcoming painful challenges and long odds. The roots of Terry’s resiliency run deep and connect him to a history he carries inside.”
—Henry Louis Gates Jr., Alphonse Fletcher University Professor and Director of the Hutchins Center for African & African American Research, Harvard University

“Terry is an extraordinary storyteller. This memoir is powerful, profoundly human, and a behind-the-scenes look at an incredible life.”
—Amanda Nguyen, civil rights activist and Time Woman of the Year 2022

“Terry has battled his way to the top, with heart and at times, with rage . . . but through it all, the man he has become is truly extraordinary. America watch out. Here is your president in waiting.”
—Bear Grylls, global adventurer, TV presenter, and bestselling author of Never Give Up

“I haven’t stopped thinking about his book since I read it. I think it was so brave of [Terry] to share his story. It can’t have been easy to be so honest about some of his hardest moments, but I think it will help a lot of people—especially men.”
—Gayle King in Oprah Daily