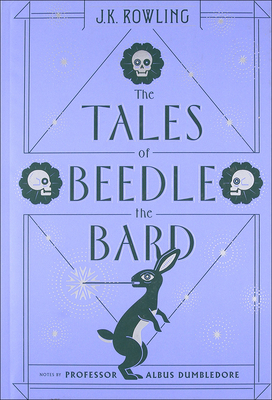 "The Tales of Beedle the Bard," a wizarding classic, first came to Muggle readers' attention in the book known as "Harry Potter and the Deathly Hallows." Now, thanks to Hermione Granger's new translation from the ancient runes, we present this stunning edition with an introduction, notes, and illustrations by J.K. Rowling, and extensive commentary by Albus Dumbledore.
Never before have Muggles been privy to these richly imaginative tales: "The Wizard and the Hopping Pot," "The Fountain of Fair Fortune," "The Warlock's Hairy Heart," "Babbitty Rabbitty and Her Cackling Stump," and of course "The Tale of the Three Brothers." But not only are they the equal of fairy tales we know and love, reading them gives new insight into the wizarding world.
This purchase also represents another very important form of giving: From every sale of this book, Scholastic will give its net proceeds to Lumos, an international non-profit organization founded by J.K. Rowling that works globally to transform the lives of disadvantaged children. wearelumos.org.

J.K. Rowling is the author of the record-breaking, multi-award-winning Harry Potter novels. Loved by fans around the world, the series has sold over 450 million copies, been translated into 79 languages, and made into 8 blockbuster films. She has written three companion volumes in aid of charity: "Quidditch Through the Ages" and "Fantastic Beasts and Where to Find Them" (in aid of Comic Relief), and "The Tales of Beedle the Bard" (in aid of Lumos), as well as a film script inspired by "Fantastic Beasts and Where to Find Them." J.K. Rowling is currently collaborating on a stage play, "Harry Potter and the Cursed Child Parts One and Two," which will open in London's West End in the summer of 2016. In 2012, J.K. Rowling's digital company Pottermore was launched, where fans can enjoy her new writing and immerse themselves deeper in the wizarding world. J.K. Rowling has written a novel for adult readers, "The Casual Vacancy," and also writes crime novels under the pseudonym Robert Galbraith. She has received many awards and honors, including an OBE for services to children's literature, France's Legion d'honneur, and the Hans Christian Andersen Award.