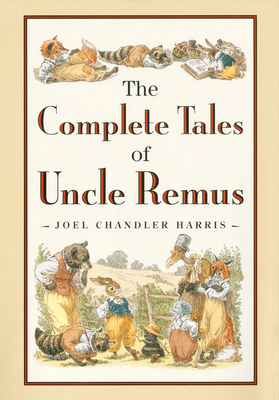 A classic book compiling the complete tales from eight books, with the original illustrations.

It’s been more than a hundred years since the publication of the first Uncle Remus book, and it was in 1955 that all of the delightful and inimitable tales of Brer Rabbit, Brer Fox, Brer Bear, and Brer Wolf were gathered together in one volume. All of the animal tales from eight books are here, along with the illustrations which originally accompanied them.

Any fan of folklore and mythology will treasure this edition.

After the first book appeared in 1880, Joel Chandler Harris was deluged with letters from readers all over the country asking for more stories of Brer Rabbit and his friends--so for the remaining years of his life he collected and wrote them. Richard Chase, noted folklorist and author of Jack Tales and Grandfather Tales, compiled and edited the volume after Harris’s death, and his occasional footnotes and word definitions contribute to our understanding of the dialect. Chase’s belief in the importance of folktales and Harris’s work is summed up in his foreword: "These tales grew up in the soil of our nation. They came from the soul of a people. They endure."

Richard Chase collected The Jack Tales in the mountain country of North Carolina, where they have been handed down for generations. Everyone knows the story of Jack and the Beanstalk. This book contains eighteen stories about Jack, many of them still completely new to the average reader. And what adventures Jack has! Noted American folklorist Richard Chase (1904–1988) has been called the man “most responsible for the renaissance of Appalachian storytelling.” A collector of tales that had been handed down from generation to generation in the Appalachian regions of the United States, Chase was born in Alabama and lived in the mountains of North Carolina.

"These stories are as American as the stars and stripes, even though they have some of their origins in Africa." Saturday Review