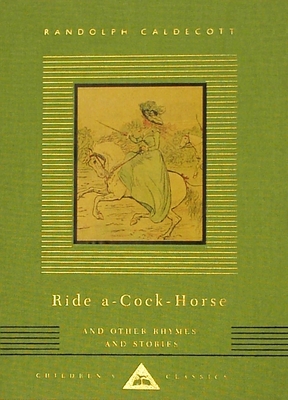 First published in 1878, this collection of comic poems and traditional rhymes for very young children is outstanding for its delightful watercolor illustrations by the great children's book illustrator Randolph Caldecott.

Randolph Caldecott (1846-86) was born in Chester, England, the son of a hatter. While still a child he showed his talent for drawing, modelling and carving, but he started his working life as a bank clerk before going to the Manchester School of Art at the age of twenty-one. He moved to London in search of commissions and produced drawings and cartoons for newspapers and journals before his first success with a set of one hundred and twenty drawings for Washington Irving's Old Christmas in 1876. It was his idea to produce a series of 'Toy Books' (picture books of a uniform size printed in colour), and this became the subject of the famous collaboration between the artist and the printer/engraver Edmund Evans. The first two – The House that Jack Built and The Diverting History of John Gilpin – were published in time for Christmas 1878 and the first printing of 10,000 copies sold out quickly. 'The very essence of all illustration for children's books', said The Times on Christmas Eve.

During the next seven years, Caldecott produced fourteen more Toy Books, illustrating nursery rhymes and songs with the interpretive skill that makes him such an important figure in the British picturebook tradition. He died, comparatively young, in St. Augustine, Florida.