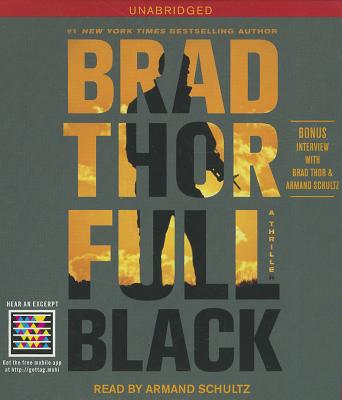 This is book number 10 in the The Scot Harvath Series series.

Born in the shadows and kept from heads of state, there are some missions so deadly, so sensitive, that they simply don’t exist. When one such mission goes horribly wrong, a wave of dramatic terrorist attacks is set in motion. Their goal: the complete and total collapse of the United States.

Simultaneously, a foreign wet work team has been sent to California. Their target: one of Hollywood’s most famous filmmakers. While working on a secret documentary project, movie producer Larry Salomon has unknowingly exposed one of the world’s wealthiest and most politically connected powerbrokers—a man with a radical anti-American agenda poised to plunge the nation into deadly, irreversible chaos.

Intense and frighteningly realistic, Full Black is hands down, Brad Thor’s most riveting thriller to date.

Brad Thor is the #1 New York Times bestselling author of twenty thrillers, including Near Dark, Backlash (one of Suspense Magazine’s Best Books of the Year), Spymaster (“One of the all-time best thriller novels”—The Washington Times), The Last Patriot (nominated Best Thriller of the Year by the International Thriller Writers Association), Blowback (one of the “Top 100 Killer Thrillers of All Time” —NPR), and The Lions of Lucerne. Visit his website at BradThor.com and follow him on Facebook at Facebook.com/BradThorOfficial and on Twitter @BradThor.