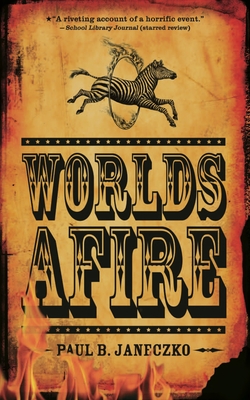 "Riveting. . . . A memorable historical fiction selection, similar in intensity to Karen Hesse’s Out of the Dust and Witness." — School Library Journal (starred review)

One summer afternoon in 1944, hundreds of circus lovers crowded under the big top in Hartford, waiting for the show to begin. Minutes later, a fire broke out and spread through the tent, claiming the lives of 167 souls and injuring some 500 more. Paul B. Janeczko recalls that tragic event by bringing to life some unforgettable voices — from circus performers to seasoned fans, from firefighters to ushers. Using the lyrical power of language to render tragedy with a human face, this spare, startling book in verse leaves an emotional impact young readers will not soon forget.

Paul B. Janeczko (1945–2019) was a poet and teacher who edited numerous award-winning poetry anthologies for young people, including A Poke in the I, A Kick in the Head, A Foot in the Mouth, and The Death of the Hat, all of which were illustrated by Chris Raschka; Firefly July, illustrated by Melissa Sweet; and The Proper Way to Meet a Hedgehog and Other How-To Poems, illustrated by Richard Jones. He also wrote Worlds Afire; Requiem: Poems of the Terezín Ghetto; Top Secret: A Handbook of Codes, Ciphers, and Secret Writing; Double Cross: Deception Techniques in War; The Dark Game: True Spy Stories from Invisible Ink to CIA Moles, a finalist for the YALSA Award for Excellence in Nonfiction for Young Adults; and Secret Soldiers: How the U.S. Twenty-Third Special Troops Fooled the Nazis.

"A searing account . . . that readers will not easily forget." — Karen Hesse