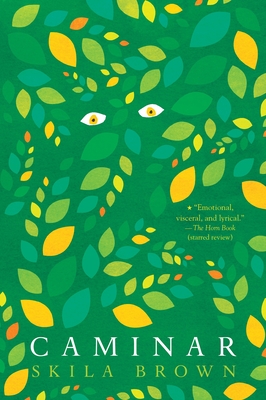 Set in 1981 Guatemala, a lyrical debut novel tells the powerful tale of a boy who must decide what it means to be a man during a time of war.

Carlos knows that when the soldiers arrive with warnings about the Communist rebels, it is time to be a man and defend the village, keep everyone safe. But Mama tells him not yet — he’s still her quiet moonfaced boy. The soldiers laugh at the villagers, and before they move on, a neighbor is found dangling from a tree, a sign on his neck: Communist. Mama tells Carlos to run and hide, then try to find her. . . . Numb and alone, he must join a band of guerillas as they trek to the top of the mountain where Carlos’s abuela lives. Will he be in time, and brave enough, to warn them about the soldiers? What will he do then? A novel in verse inspired by actual events during Guatemala’s civil war, Caminar is the moving story of a boy who loses nearly everything before discovering who he really is.

Skila Brown has an MFA in writing for children and young adults from Vermont College of Fine Arts. She has visited Guatemala numerous times in the last decade. She lives in Indiana with her husband and their three children.

Exquisitely crafted poems are the basis of an unusually fine verse novel set in 1981, in the middle of the Guatemalan Civil War. ... The poems, all written from Carlos’s point of view, are emotional, visceral, and lyrical. Layered and varied, some are shape poems; some can be read in more than one way, as if written from two perspectives; and all are accessible to young readers. ... All combine to give us a chillingly memorable portrait of one child surviving violence and loss in a time of war.
—The Horn Book (starred review)

'Caminar' contributes poetry that elevates the genre. ... Readers will encounter a range of imagery, repetition, rhythms, and visual effects that bring to life the psychological experience of Carlos, a young boy caught in the violent clash between the government’s army and the people’s rebels. ... This is a much-needed addition to Latin American-themed middle grade fiction.
—School Library Journal (starred review)

The Guatemalan Civil War is powerfully fictionalized through the eyes of a young boy on the verge of becoming a man in this debut novel. ... This is a welcome way to increase the diversity of any collection while providing a glimpse into a period of history unknown to most American kids. A glossary of Spanish words is included.
—Booklist

Brown uses concrete poetry to excellent effect, skillfully playing with spacing, structure, and repetition. ... Brown offers some historical context in an opening note and a Q&A (a glossary of Spanish words is also included), but the ambiguities and uncertainties within the story itself help align readers with Carlos and his fellow villagers, caught in a conflict they don’t understand.
—Publishers Weekly

The free-verse poetry in this verse novel is tightly crafted to evoke Carlos’ confusion and emotional turmoil both prior to and after the massacre, employing both shape and resonant language to pull readers into his hesitations, sadness, and terror. ... The accessible imagery in the poetry will engage readers on a visceral level, ably communicating the limitations of Carlos’ understanding, both in terms of his youth and his inability to comprehend the full scope of the conflict.
—Bulletin of the Center for Children's Books

Brown’s sparse story ... would be a solid choice for a teen poetry or world conflict school unit. The free-verse format makes it a quick read, and ... Brown’s poetry ... shares rich details, like the sounds of helicopter blades or the feel of marbles in Carlos’s hand. Brown conveys the fear and violence of Carlos’s experiences without overwhelming readers, making it appropriate for most middle schoolers.
—VOYA

A beautifully wrought, delicately written novel that makes the unthinkable palatable to the young.
—A Fuse #8 Production