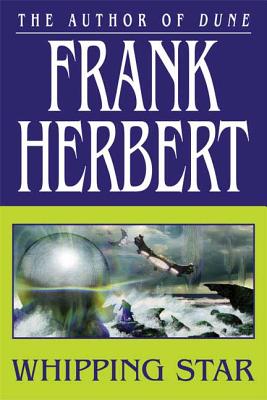 A classic novel from the master of science fiction, Frank Herbert's Whipping Star. “Herbert is one of the most thought-provoking writers of our time; by focusing on ‘alien' culture, he makes us examine what the true definition of ‘human' is.” —The Pacific Sun

In the far future, humankind has made contact with numerous other species: Gowachin, Laclac, Wreaves, Pan Spechi, Taprisiots, and Caleban, and has helped to form the ConSentiency to govern among the species. After suffering under a tyrannous pure democracy, the sentients of the galaxy find the need for a Bureau of Sabotage (BuSab) to slow the wheels of government, thereby preventing it from legislating recklessly. BuSab is allowed to sabotage and harass the governmental, administrative, and economic powers in the ConSentiency. Private citizens must not be harassed, and vital functions of society are also exempt.

Jorj X. McKie is a born troublemaker who has become one of BuSab's best agents. Drafted for the impossible task of establishing meaningful communication with an utterly alien entity who defies understanding, McKie finds himself racing against time to prevent a mad billionairess from wiping out all life in the ConSentiency.

Frank Herbert (1920-1986) created the most beloved novel in the annals of science fiction, Dune.  He was a man of many facets, of countless passageways that ran through an intricate mind.  His magnum opus is a reflection of this, a classic work that stands as one of the most complex, multi-layered novels ever written in any genre.  Today the novel is more popular than ever, with new readers continually discovering it and telling their friends to pick up a copy.  It has been translated into dozens of languages and has sold almost 20 million copies.

As a child growing up in Washington State, Frank Herbert was curious about everything. He carried around a Boy Scout pack with books in it, and he was always reading.  He loved Rover Boys adventures, as well as the stories of H.G. Wells, Jules Verne, and the science fiction of Edgar Rice Burroughs.  On his eighth birthday, Frank stood on top of the breakfast table at his family home and announced, "I wanna be a author."  His maternal grandfather, John McCarthy, said of the boy, "It's frightening. A kid that small shouldn't be so smart." Young Frank was not unlike Alia in Dune, a person having adult comprehension in a child's body.  In grade school he was the acknowledged authority on everything.  If his classmates wanted to know the answer to something, such as about sexual functions or how to make a carbide cannon, they would invariably say, "Let's ask Herbert. He'll know."

His curiosity and independent spirit got him into trouble more than once when he was growing up, and caused him difficulties as an adult as well.  He did not graduate from college because he refused to take the required courses for a major; he only wanted to study what interested him.  For years he had a hard time making a living, bouncing from job to job and from town to town. He was so independent that he refused to write for a particular market; he wrote what he felt like writing.  It took him six years of research and writing to complete Dune, and after all that struggle and sacrifice, 23 publishers rejected it in book form before it was finally accepted. He received an advance of only $7,500.

His loving wife of 37 years, Beverly, was the breadwinner much of the time, as an underpaid advertising writer for department stores.  Having been divorced from his first wife, Flora Parkinson, Frank Herbert met Beverly Stuart at a University of Washington creative writing class in 1946.  At the time, they were the only students in the class who had sold their work for publication.  Frank had sold two pulp adventure stories to magazines, one to Esquire and the other to Doc Savage.  Beverly had sold a story to Modern Romance magazine.  These genres reflected the interests of the two young lovers; he the adventurer, the strong, machismo man, and she the romantic, exceedingly feminine and soft-spoken.

Their marriage would produce two sons, Brian, born in 1947, and Bruce, born in 1951. Frank also had a daughter, Penny, born in 1942 from his first marriage.  For more than two decades Frank and Beverly would struggle to make ends meet, and there were many hard times.  In order to pay the bills and to allow her husband the freedom he needed in order to create, Beverly gave up her own creative writing career in order to support his.  They were in fact a writing team, as he discussed every aspect of his stories with her, and she edited his work.  Theirs was a remarkable, though tragic, love story-which Brian would poignantly describe one day in Dreamer of Dune (Tor Books; April 2003).  After Beverly passed away, Frank married Theresa Shackelford.

In all, Frank Herbert wrote nearly 30 popular books and collections of short stories, including six novels set in the Dune universe: Dune, Dune Messiah, Children of Dune, God Emperor of Dune, Heretics of Dune, and Chapterhouse: Dune.  All were international bestsellers, as were a number of his other science fiction novels, which include The White Plague and The Dosadi Experiment.  His major novels included The Dragon in the Sea, Soul Catcher (his only non-science fiction novel), Destination: Void, The Santaroga Barrier, The Green Brain, Hellstorm's Hive, Whipping Star, The Eyes of Heisenberg, The Godmakers, Direct Descent, and The Heaven Makers. He also collaborated with Bill Ransom to write The Jesus Incident, The Lazarus Effect, and The Ascension Factor.  Frank Herbert's last published novel, Man of Two Worlds, was a collaboration with his son, Brian.

“Herbert is one of the most thought-provoking writers of our time; by focusing on ‘alien' culture, he makes us examine what the true definition of ‘human' is.” —The Pacific Sun