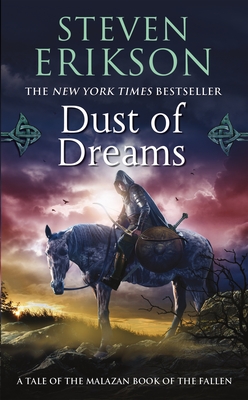 In war everyone loses. This brutal truth can be seen in the eyes of every soldier in every world…

In Letherii, the exiled Malazan army commanded by Adjunct Tavore begins its march into the eastern Wastelands, to fight for an unknown cause against an enemy it has never seen.

This last great army of the Malazan Empire is resolved to make one final defiant, heroic stand in the name of redemption. But can deeds be heroic when there is no one to witness them? And can that which is not witnessed forever change the world? Destinies are rarely simple, truths never clear but one certainty is that time is on no one's side. For the Deck of Dragons has been read, unleashing a dread power that none can comprehend…

In a faraway land and beneath indifferent skies, the final chapter of ‘The Malazan Book of the Fallen' has begun…

“This masterwork of imagination may be the high-water mark of epic fantasy.” —Glen Cook, author of The Chronicles of the Black Company

“Erikson has no peer when it comes to action and imagination, and joins the ranks of Tolkien and Donaldson in his mythic vision and perhaps then goes one better.” —SF Site