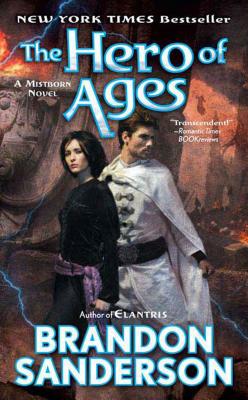 This is book number 3 in the Mistborn series.

“This adventure brings the Mistborn epic fantasy trilogy to a dramatic and surprising climax. . . . Sanderson's saga of consequences offers complex characters and a compelling plot, asking hard questions about loyalty, faith and responsibility.” —Publishers Weekly on The Hero of Ages

“Transcendent!” —Romantic Times BOOKreviews on The Hero of Ages

“Elantris . . . is marked by vivid and strongly drawn characters (including a memorable female character) and ingenious plot twists that will keep the reader turning pages. Don't miss it!” —Katherine Kurtz, New York Times bestselling author of the Deryni series