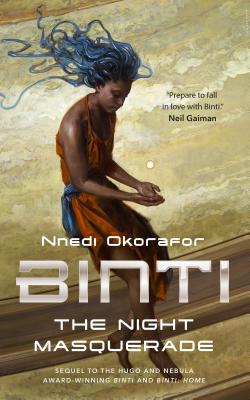 This is book number 3 in the Binti series.

The concluding part of the highly-acclaimed science fiction trilogy that began with Nnedi Okorafor's Hugo- and Nebula Award-winning BINTI.

Binti has returned to her home planet, believing that the violence of the Meduse has been left behind. Unfortunately, although her people are peaceful on the whole, the same cannot be said for the Khoush, who fan the flames of their ancient rivalry with the Meduse.

Far from her village when the conflicts start, Binti hurries home, but anger and resentment has already claimed the lives of many close to her.

Once again it is up to Binti, and her intriguing new friend Mwinyi, to intervene--though the elders of her people do not entirely trust her motives--and try to prevent a war that could wipe out her people, once and for all.

Don't miss this essential concluding volume in the Binti trilogy.

"The prose is vivid and unadorned, the pacing strong, and the novella as a whole, deeply compelling. I enjoyed it. I hope Okorafor writes more." Locus

"Okorafors writing is wonderful, and the details of her world-building including Bintis rich culture of origin, living spaceships, and maths that reads almost like music are complex and fascinating" Veronica Roth

"Okorafor's writing is even more beautiful than I remember it being in Binti, evocative and sharply elegant in its economy." NPR

"[Binti: Home] opens up Binti's tale in astonishing ways, while provocatively exploring questions of identity and kinship." The Chicago Tribune

"Nnedi Okorafor's imagination and worldbuilding are unparalleled, as are the heartfelt emotional struggles she creates." Jim C. Hines, author of Blood of Heroes and the Goblin Quest trilogy

PRAISE FOR BINTI AND NNEDI OKORAFOR

"Binti is a supreme read about a sexy, edgy Afropolitan in space! It's a wondrous combination of extra-terrestrial adventure and age-old African diplomacy. Unforgettable!"Wanuri Kahiu, award winning Kenyan film director of Pumzi and From a Whisper