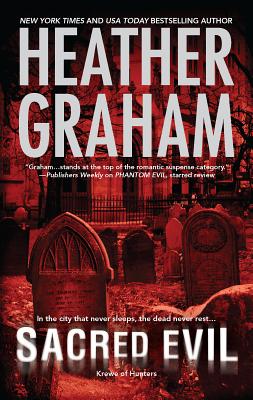 This is book number 3 in the Krewe of Hunters series.

A Terror Born of Jack the Ripper The details of the crime scene are no coincidence. The body--a promising starlet--has been battered, bloodied and then discarded between two of Manhattan's oldest graveyards. One look and Detective Jude Crosby recognizes the tableau--a re-creation of Jack the Ripper's gruesome work. But he also sees something beyond the actions of a mere copycat. Something more dangerous...and unexplainable. As the city seethes with suspicion, Jude calls on Whitney Tremont, a member of the country's preeminent paranormal investigating team, to put the speculation to rest. Yet when Whitney and Jude delve deeper, what they discover is more shocking than either could have predicted...and twice as sinister....

"Graham does a great job of blending just a bit of paranormal with real, human evil."

"There are good reasons for Graham's steady standing as a bestselling author. Here her perfect pacing keeps readers riveted as they learn fascinating tidbits of New Orleans history. The paranormal elements are integral to the unrelentingly suspenseful plot, the characters are likable, the romance convincing and, in the wake of Hurricane Katrina, Graham's atmospheric depiction of a lost city is especially poignant."