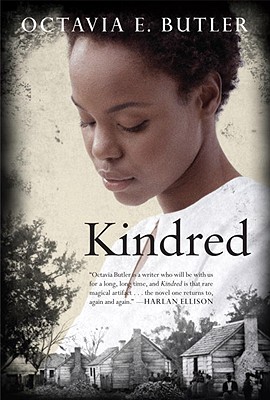 From the New York Times bestselling author of Parable of the Sower and MacArthur “Genius” Grant, Nebula, and Hugo award winner

The visionary time-travel classic whose Black female hero is pulled through time to face the horrors of American slavery and explores the impacts of racism, sexism, and white supremacy then and now.

“I lost an arm on my last trip home. My left arm.”

Dana’s torment begins when she suddenly vanishes on her 26th birthday from California, 1976, and is dragged through time to antebellum Maryland to rescue a boy named Rufus, heir to a slaveowner’s plantation. She soon realizes the purpose of her summons to the past: protect Rufus to ensure his assault of her Black ancestor so that she may one day be born. As she endures the traumas of slavery and the soul-crushing normalization of savagery, Dana fights to keep her autonomy and return to the present.

Blazing the trail for neo-slavery narratives like Colson Whitehead’s The Underground Railroad and Ta-Nehisi Coates’s The Water Dancer, Butler takes one of speculative fiction’s oldest tropes and infuses it with lasting depth and power. Dana not only experiences the cruelties of slavery on her skin but also grimly learns to accept it as a condition of her own existence in the present. “Where stories about American slavery are often gratuitous, reducing its horror to explicit violence and brutality, Kindred is controlled and precise” (New York Times).

“Reading Octavia Butler taught me to dream big, and I think it’s absolutely necessary that everybody have that freedom and that willingness to dream.”
—N. K. Jemisin

Octavia E. Butler (1947-2006) was the author of many novels, including Dawn, Wild Seed, and Parable of the Sower. She was the recipient of a MacArthur Award and a Nebula Award, and she twice won the Hugo Award.

In Kindred, Octavia Butler creates a road for the impossible and a balm for the unbearable. It is everything the literature of science fiction can be.—Walter Mosley

"Butler's characters are so vivid and the racist milieu in which they struggle to survive so realistically depicted that one cannot finish Kindred without feeling changed. It is a shattering work of art with much to say about love, hate, slavery, and racial dilemmas, then and now."—Sam Frank, Los Angeles Herald-Examiner

"Like emotion that uplifts and enriches, like exquisite music or the taste of some special candy remembered from childhood, I never wanted Kindred to end. It overwhelmed me, dominated me, drew me on page after page. To express my total admiration and wonder for the originality of this surpassingly compelling novel, I am driven to a despised cliché: I could not put it down! It is a book that simply will not be denied; its power is hypnotic. Kindred is a story that hurts: I take that to be the surest indicator of genuine Art. It is an important novel, filled with powerful human insight and the shocking impact of the most commonplace experiences viewed in a new way, and it demands that once begun, the reader continue till it has done its work on the heart and mind and soul. Octavia Butler is a writer who will be with us for a long, long time, and Kindred is that rare, magical artifact . . . the novel one returns to, again and again, through the years, to learn, to be humbled, and to be renewed. Do not, I beg you, deny yourself this singular experience."—Harlan Ellison

"Butler's books are exceptional. . . . She is a realist, writing the most detailed social criticism and creating some of the most fascinating female characters in the genre . . . real women caught in impossible situations." —Dorothy Allison, The Village Voice

"Her books are disturbing, unsettling… In a field dominated by white male authors, Butler's African-American feminist perspective is unique, and uniquely suited to reshape the boundaries of the sci-fi genre." —Bill Glass, L. A. Style

"One of the most original, thought-provoking works examining race and identity." —Lynell George, Los Angeles Times

"This powerful novel about a modern black woman transported back in time to a slave plantation in the antebellum South is the perfect introduction to Butler's work and perspectives for those not usually enamored of science fiction. . .A harrowing, haunting story." —John Marshall, Seattle Post-Intelligencer