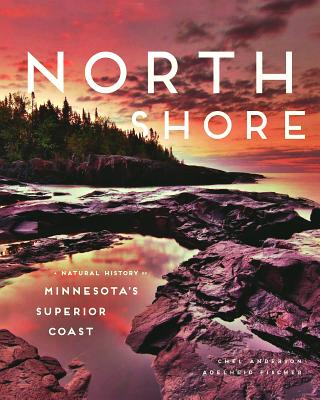 By Chel Anderson, Adelheid Fischer
$39.95
Email or call for price.

Propelled by wings, fins, legs, and the wind, life has found a way to Minnesota’s North Shore for more than twelve thousand years. Some plants and animals have taken up residence in the region’s ancient mountains, others in its lakes and flowing rivers. Together, they weave a living fabric of sublime and fascinating beauty. These organisms come to life in North Shore, a comprehensive environmental history of one of Minnesota’s most beloved places.

The story of this region unfolds through the five interconnected areas of Minnesota’s North Shore watershed—the meandering rivers of the Headwaters, the deep and dense forest of the Highlands, the rocky Nearshore, the drama of Lake Superior, and its mysterious islands, including Isle Royale and Susie Island archipelagos. Each section begins with an overview of the forces that have shaped the area, then the focus turns to a wide range of inhabitants, such as chorus frogs and star-nosed moles, butterworts and coaster brook trout, jeweled diatoms and pitcher plants, black bears and blue-spotted salamanders. Each chapter links to the region’s broader history, from the sculpting of the land by mile-high glaciers to the role of scientific exploration, the advent of logging, the development of tourism, and the changing global climate.

North Shore reminds us that the natural history of this extraordinary region is still being created and that each of us—individually and collectively—are the authors of this ongoing narrative. Compelling and accessible, the book will provide readers with a science-based knowledge of the Minnesota North Shore watershed so that together we can write a new, hopeful chapter for its inhabitants, both human and wild.

Chel Anderson came to live and work on Minnesota’s North Shore in 1974. Since then she has worked in various positions in the Superior National Forest, as a consulting ecologist and botanist in the private and public sectors, and with the Minnesota Biological Survey. In 2001 she received the Minnesota Chapter of the Nature Conservancy’s Conservation Award for her “tireless efforts to inventory northeast Minnesota’s plant communities, her work to support conservation action with sound science, and her extraordinary ability to inspire passion for wild things and wild places.”

Adelheid Fischer is a writer who focuses on natural history, ecology, and environmental history. She has written for many publications, including Utne Reader, Orion, Conservation, Places, and Arizona Highways. She is the coauthor of Valley of Grass: Tallgrass Prairie and Parkland of the Red River Region, winner of a Minnesota Book Award for Nature Writing. In 2014 she received the Ellen Meloy Desert Writers Award. A sixteen-year resident of Minnesota, Fischer now makes her home at the foot of South Mountain in the Sonoran Desert of Arizona.

"In North Shore, lovers of that sacred strip of scree and cold water finally have a definitive natural history. But they also have a meticulous and wondrous book that will entertain as much as educate, that demystifies even as it allows for the magical moments the North Shore is famous for inspiring. I’ve never felt so in tune with my favorite place as I did turning the last page of this book, and seldom have I felt so thankful."
—Peter Geye

"North Shore: A Natural History of Minnesota's Superior Coast reads like a friendly and detailed journal that Great-great-great-great Grandmother Earth has been keeping from the very beginning. It tells  the natural and cultural story of the North Shore: past, present, and future."
—Betsy Bowen, writer, illustrator, and long-time North Shore resident

"North Shore satisfies in its breadth but never complicates.

"[Y]ou will be amazed, as I have been, at how compelling worms, frogs, and scientific exploration can be. "—Lake Superior Magazine

"North Shore reminds us that the natural history of the region is still being written, and that all of us who live near its shores are the creators of the next chapter."—The Ely Winter Times

"Chel Anderson and Adelheid Fischer have written an accessible book that comprehensively describes the history and geology of the coast, surrounding highlands, and Lake Superior itself. In addition, the authors have provided fascinating subchapters on some of the most interesting species that are key elements of the region."—The Prairie Naturalist

"[North Shore] is a celebration of the big and little lives that make Lake Superior and its surrounding region so richly complex, an eye-opening recounting of human errors that have brought the natural systems close to collapse."—SEJournal

"Compelling and accessible, the book provides readers with a science-based knowledge of the Minnesota North Shore watershed."—Ely Timberjay

"North Shore. . .  is vast in scope, thought-provoking, and poetic in places. It is full of passages that invite repeated visits, and reveal deeper meanings with each visit. "—Wilderness News

"Has the substance of a textbook, but reads in a friendly and fascinating narrative."—Star Tribune