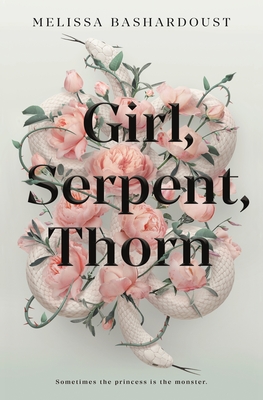 Melissa Bashardoust's Girl, Serpent, Thorn is “an alluring feminist fairy tale” (Kirkus) about a girl cursed to be poisonous to the touch and who discovers what power might lie in such a curse.

There was and there was not, as all stories begin, a princess cursed to be poisonous to the touch. But for Soraya, who has lived her life hidden away, apart from her family, safe only in her gardens, it’s not just a story.

As the day of her twin brother’s wedding approaches, Soraya must decide if she’s willing to step outside of the shadows for the first time. Below in the dungeon is a demon who holds knowledge that she craves, the answer to her freedom. And above is a young man who isn’t afraid of her, whose eyes linger not with fear, but with an understanding of who she is beneath the poison.

Soraya thought she knew her place in the world, but when her choices lead to consequences she never imagined, she begins to question who she is and who she is becoming...human or demon. Princess or monster.

Melissa Bashardoust received her degree in English from the University of California, Berkeley, where she rediscovered her love for creative writing, children’s literature, and fairy tales and their retellings. She currently lives in Southern California with a cat named Alice and more copies of Jane Eyre than she probably needs. Girls Made of Snow and Glass is her first novel.

“A can't-miss LGBTQ+ YA fantasy that gleefully rewrites the fairy tale playbook.” —PopSugar.com

“Bashardoust draws from the myths and religions of her own Persian culture to create a world simmering with magic and treachery where no one is quite what they appear to be. With crystalline, sometimes sensuous prose, Bashardoust digs into her characters’ motivations and manipulations, deftly keeping readers on the hook until the final, stunning turn.” —Booklist, starred review

“Bashardoust again draws elements from multiple folkloric and literary precursors for a relationship-driven tale in which sexual undertones are no less intense for being kept between the lines. Alert readers will spot nods to other classics as events whirl to a climatic close amid cascades of poisoned thorns, just deserts, and self-acceptance. Surefire for readers fond of princesses capable of embracing actual demons as well as the inner sort.” —SLJ, starred review

“Girl, Serpent, Thorn balances a raw, human core of emotion with a fast-moving, intriguing plot that draws fresh inspiration from Iranian culture past and present. Soraya is a fascinating protagonist whose approach to the world is always-engaging, even as her constant missteps drive the novel forward...For so many of us who grew up identifying with villains, challenged by the desire to get a little revenge (or a lot), Soraya provides a beautiful touchstone. She does wrong; she does right. She chooses.” —Tor.com

“A lush, dream-like tale about a princess whose very skin in poison, and whose isolation leads her to a journey of discovery that is both harrowing and beautiful. The author dives deep into ancient Persian myth. . . . At the same time, she subverts fantasy tropes while delving into philosophical questions of personhood, individuation, and societal impositions—all with a narrative that is perfectly paced.” —Sabaa Tahir

“A delight­ful and energetic book, one that effortlessly avoids any hint of a sophomore slump to present us with a vivid world, a compelling cast, and a narrative that managed to deftly surprise. . . . A twisty, fascinating, well-paced novel that builds to a conclusion that is more than well-earned. Soraiya is a compelling protagonist, and one whose struggles are very relatable.” —Locus

“YA literature at its best.” —BookPage

“Girl, Serpent, Thorn takes your expectations of a fairy tale and turns them on their head, creating an elaborate, unconventional and fascinating story, complete with heroes who are morally questionable and villains who you’ll fall in love with. Will they live happily ever after? We’ll let you find out for yourselves—but it probably won’t work out the way you expect.” —SciFiNow